I love those first moments when you have stepped foot in a new place that has intrigued you for ages. Whether it has intrigued you because it is famous or because you have a particular fascination with it or because it is incredibly remote and was a feat to get to. As you can imagine, the Amazon was such a place for me. It has always been a destination, at least in my mind, that I felt in order to call myself a “true adventurer” I needed to visit.

My morning began early and at a Port along the Amazon River in Manaus. I boarded my boat and my heart was aflutter with excitement! There were some loud Italians chain smoking in the front of the boat, so I excused myself and went to the back to have some alone time with my thoughts. What did this magical place have in store for me over these next few days? 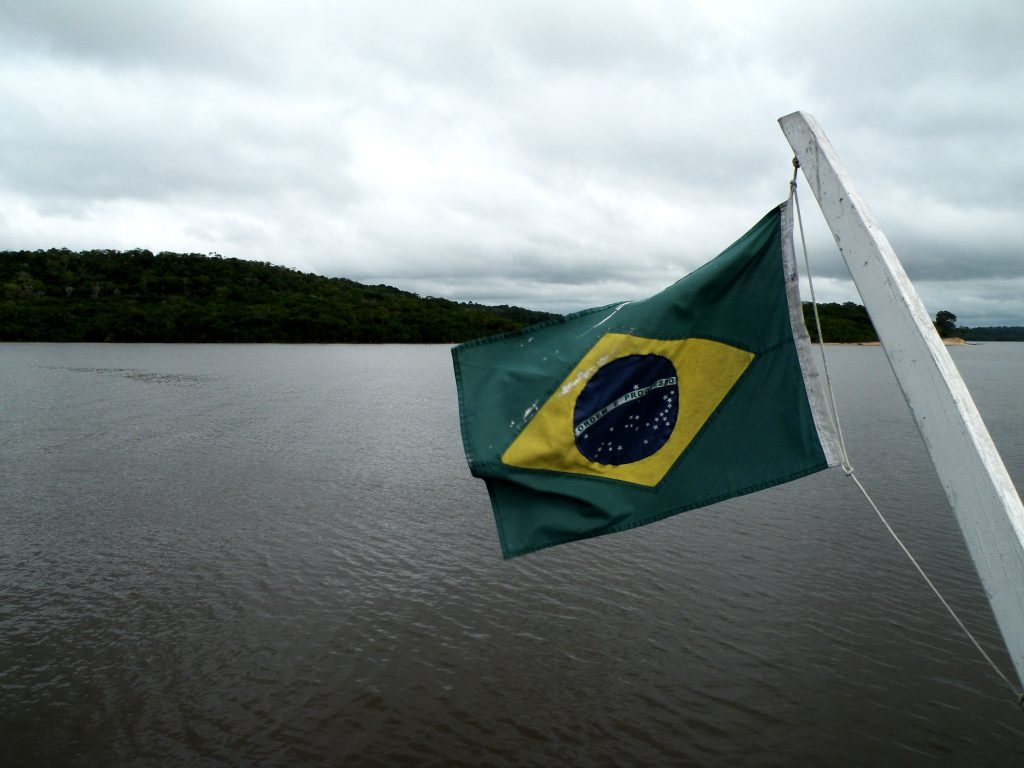 The scenery during the first twenty minutes of the boat-ride was nothing special, however soon the river’s mouth began to narrow and the surrounding jungle became more lush. I knew then that I had arrived. I began to experience those “first moments” that I previously mentioned. It was simply surreal! 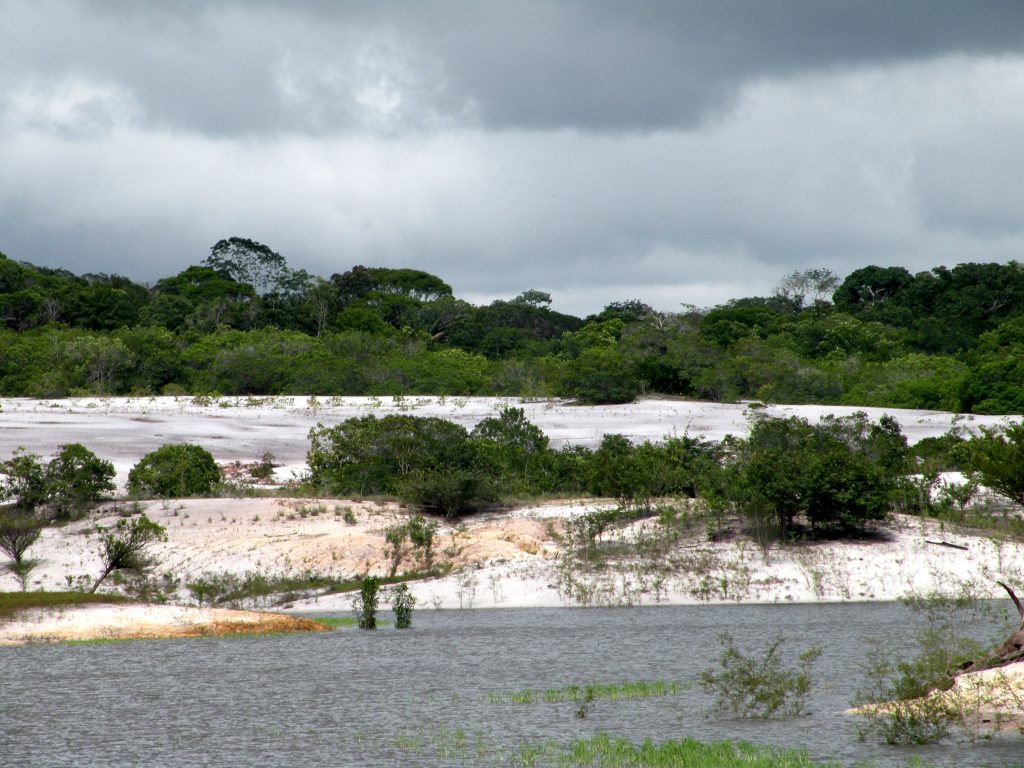 The best way to see the Amazon is to fly into the city of Manaus, which is considered the gateway. In Manaus, you will be able to find copious companies that will offer tours to suit all budgets. I wanted accommodations on the more luxurious side, however I also wanted to take daily excursions deeper into the jungle and further along the river. This is why I chose the eco-lodge that I would be staying at, as it seemed to be exactly what I desired; it was surrounded by jungle, however it provided all of the luxury amenities my heart could desire. 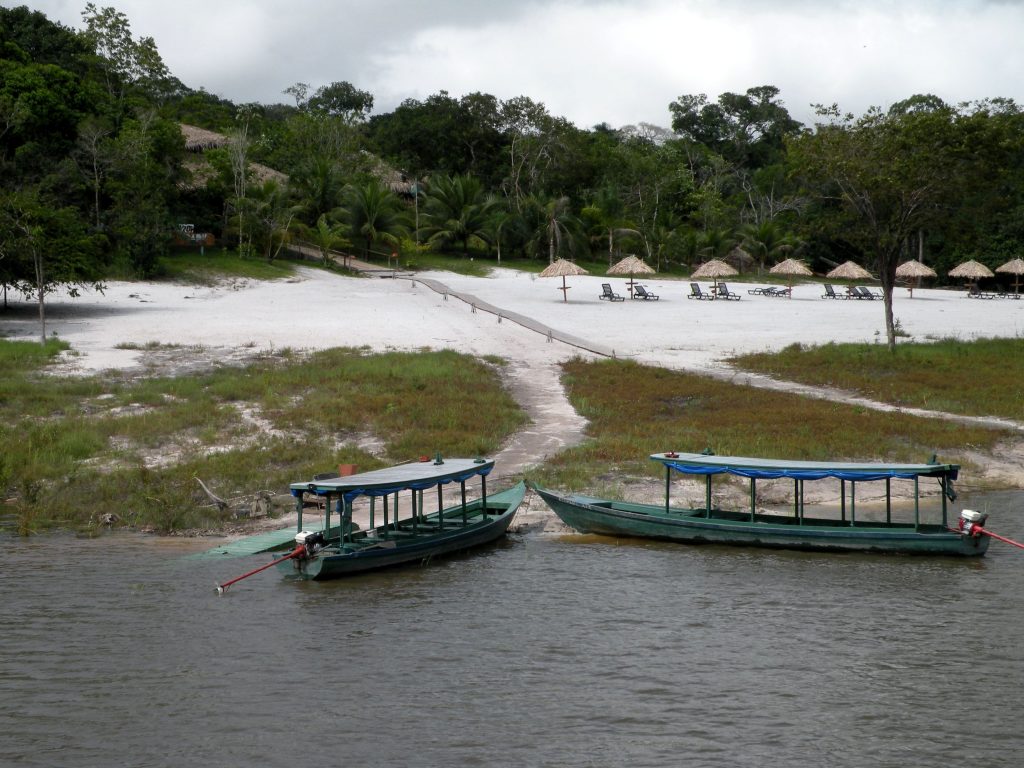 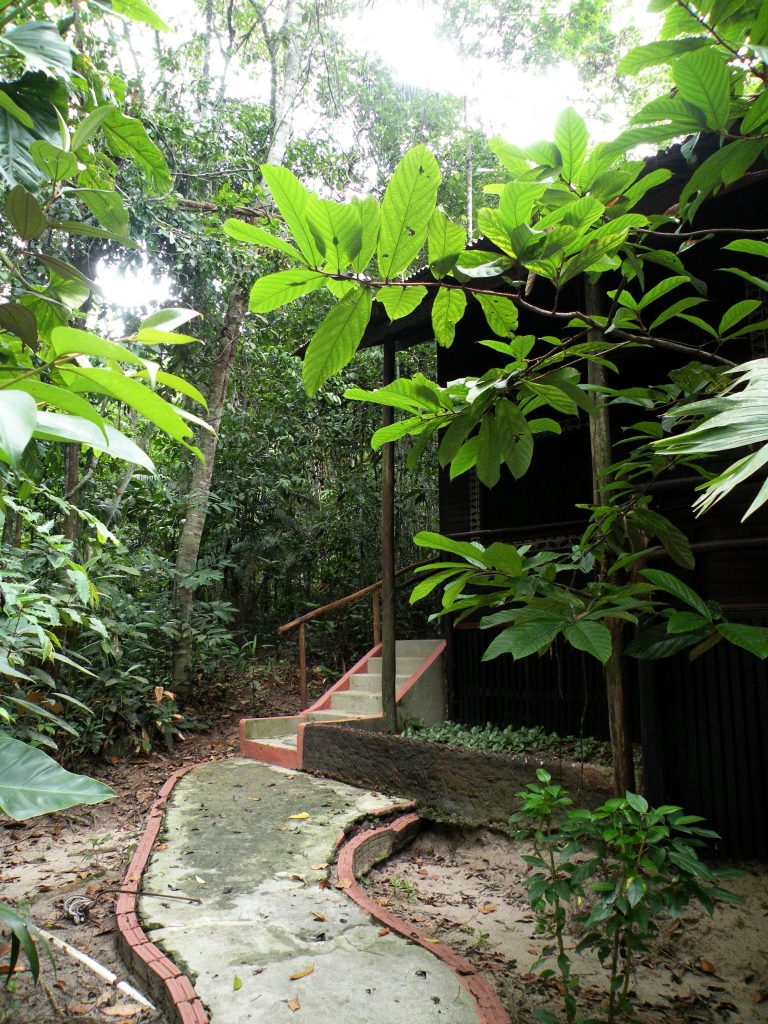 At check-in, I was told that my tour guide was in the midst of giving someone else a tour and that he would pick me up soon for my first tour to the Monkey Forest. I unpacked, sprayed myself with organic bug spray, and made sure my camera was ready to go. I also jumped up and down, silently screamed, and did a little dance — I was in the Amazon!

An hour later I heard a knock at my door. It was my guide, Alberto. I did not know who to expect when I opened the door, but I did know from the moment he smiled at me that we would become close and fast friends. Alberto had grown up in the jungle for the first twenty-five years of his life. After encountering some tourists, his curiosity led him to want to learn more about the rest of the world. He left the jungle for Manaus, where he studied tourism and learned fluent English and Russian. He returned back to the jungle years later, however this time it was to give tours, not to live. He quickly became one of the most sought out guides in the entire Amazon. It is easy to understand why after being around him. He exudes this incredible energy and his knowledge of the land is impressive beyond words. 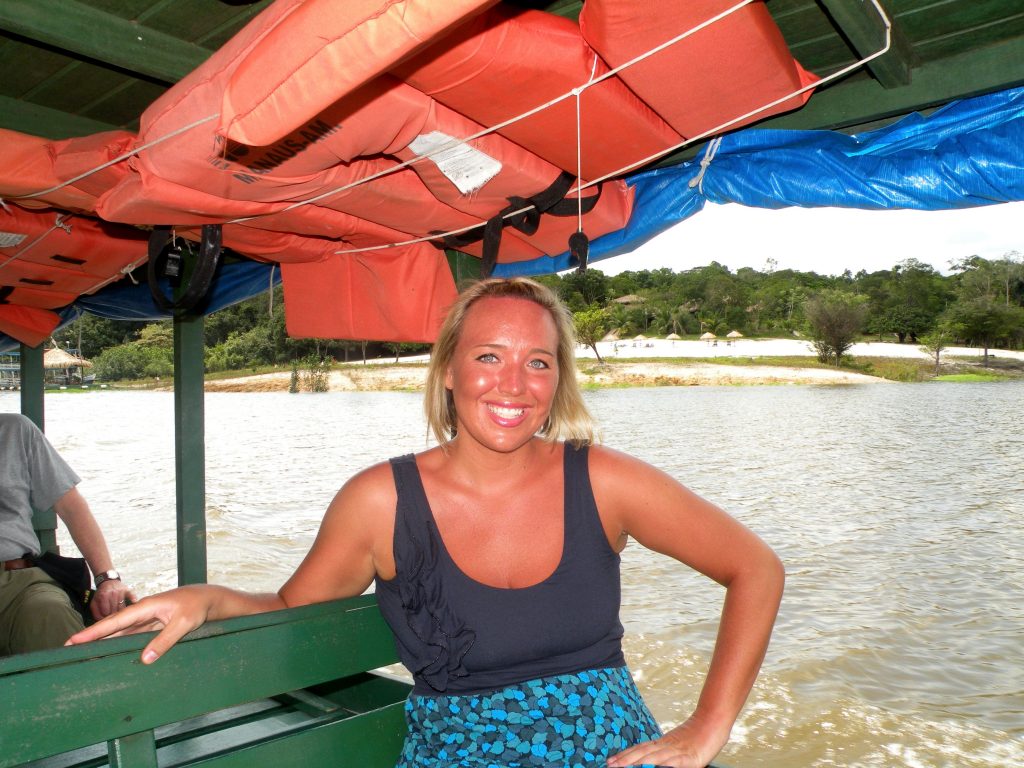 Our first stop of the day was to an island about ten minutes away from the eco-lodge. It is named the Monkey Forest, because there is a center for rehabilitation and reintroduction of the monkeys into the wild. It was created with the intention of receiving animals, which have been confiscated from illegal commerce. I could hear the monkeys singing while we were still half a mile away!

In the center, the animals are initially put into quarentine to be evaluated and taken care of by a team of vetenarians and biologists. With a high success rate since the start, the animals manage to reproduce naturally, creating new families and ensuring survival of the spieces.

The following are some of my favorite photos I took of the monkeys: 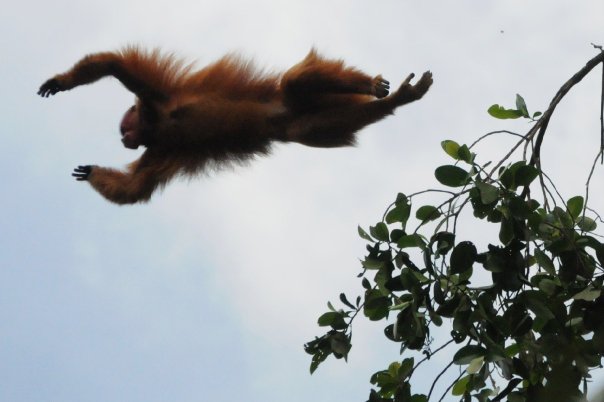 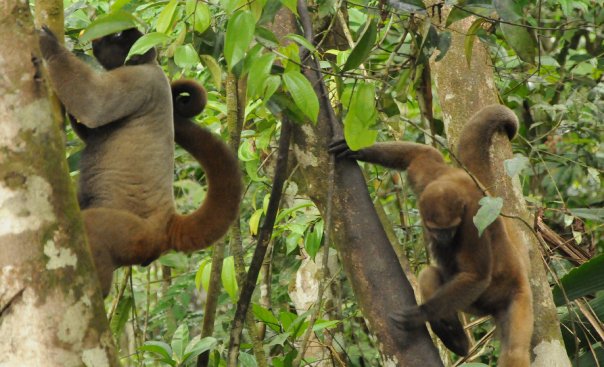 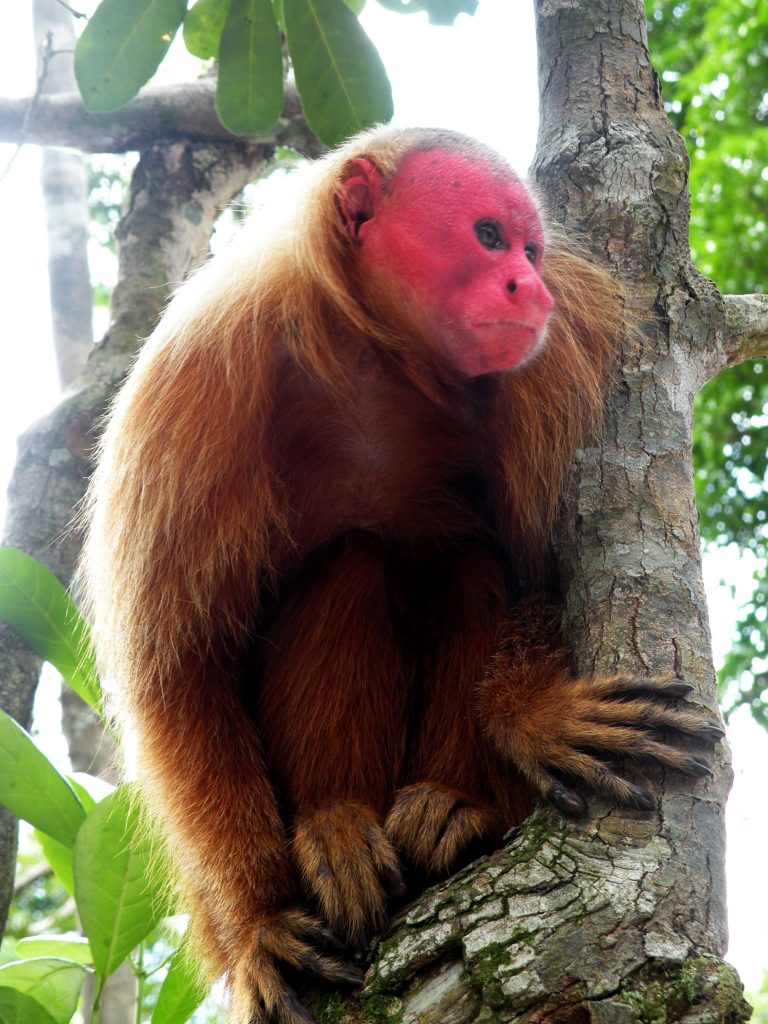 And of course I had to pose with one of the cheeky ones! 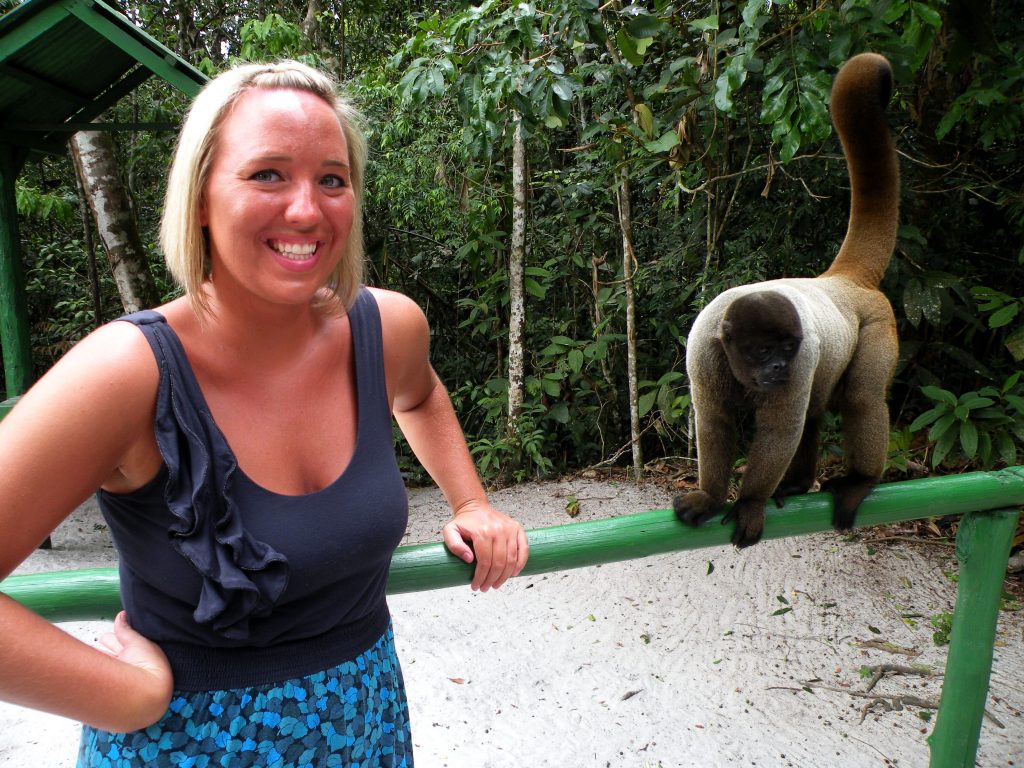 Stay tuned to find out what Amazonian adventure I completed next. . .