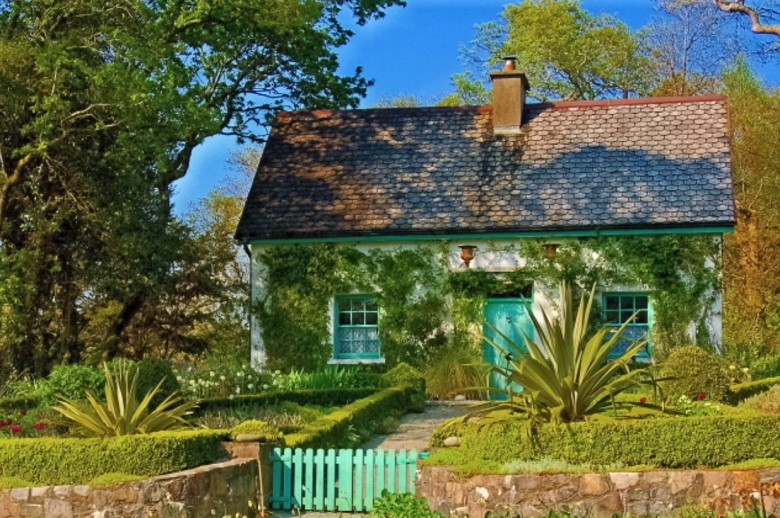 Twenty years ago or so, my wife and I got married. It was autumn and our wedding cake featured blackberries and other seasonal produce. We were very happy and went on a honeymoon to the West of Ireland. It rained a lot, but we did not care.

A week into our stay, we were driving along a lane and saw an old house, unloved and covered with ivy. We found out it was for sale and made a rash decision for newlyweds. We ended up scraping every penny together we could find, and on a wing and a prayer, we bought that old house. Six months later we living there and we made our first home together.

Ten years and one feisty daughter later, we traveled to New Zealand and decided we loved it enough to stay a while. We made a home there in another unloved house. We filled both houses with our energy and our furniture as it accumulated, but most of all we created a home.  Two decades on, that feisty daughter is in college, and we are on the other side of the world — you guessed it — making a home again. It got me thinking. What makes a home?

It Is Your Refuge

Of course it is! It is a sanctuary. It is the place you come to curl up. The place where you can be with your family and friends. I like to think that is what happened wherever we have been. Sure we have done our best to make it homely. Our Irish home had not been lived in for 17 years. It had no running water and no electricity, but the day we cleared the chimney and lit the fire was a huge moment. There are fun things you do to make it habitable. Perhaps you paint the walls, strip the floors, and try and make a garden. Somebody might get carried away and knock a wall down.

Furniture came as we could afford it. Some we made and some was given. Special tokens like artwork, rugs, and lamps were gifts from friends and family. Eventually, we did what most other people do and found special pieces of furniture that we liked. We could always check out TopRate ten and find any of the cool pieces that we needed. And as our daughter came along, the house was filled with laughter and just about everything we could shower her with.

Not just with family, but with friends, sharing a meal, staying for a weekend. Going on huge walks along the coast or off to the beach. It is where holidays happen. Your first Christmas together. Our first Christmas in New Zealand seemed a bizarre affair having been used to the Northern Hemisphere. Carols played on the radio and the sun scorched down on the deck.

Extended family come over during the summer. There were lakeside picnics and beach days occasionally. We took trips out to mountains and the national parks. However, coming home was always the best. Coming home meant you could be who you really were. You did not have to stand on ceremony; it was your place, and you did whatever you liked.

It Is Where The Heart Is

Leaving each of those houses became a purely functional process. We packed up the bits and pieces that we had become attached to. We sold some furniture for far less than we paid, and we offloaded other bits into garage sales. We gave away what we did not need. Most of it was just stuff. There were boxes full of books, keepsakes, and the really important mementos that I guess everyone gets attached to. But we felt strangely unsentimental. A house we felt was not a home. A house is walls and a door. It has a roof that does not leak if you are lucky. A house has windows, which was more than you could say for our Irish cottage when we first moved in.

A house gets filled with people and people make a home. It was true 20 ago and as we walked over the threshold of our new house. I hope it will be true again!

I love the whole process of decluttering and starting again, although I am not sure how many times I am physically going to be prepared to do it. I love getting the new sofa or salvaging the old chair we found at a charity store. I love visiting the designer store and finding something that I must have. I love the parts of a kitchen that revolve around the center of food and friendship. I love the dining table magic that happens when good friends get together. Most of all, I love the home we make when we are all there down for the weekend. That is what makes a home and being in it makes me feel extremely lucky.

3 thoughts on “How To Create A Welcoming Home”