My trip to Brasil began to materialize last June when I discovered that USAirways was starting a new direct route from Charlotte, North Carolina (my hometown) to Rio de Janeiro, Brasil the following December. I had 100,000 points with the airline and had been waiting for the right opportunity to use them. Plus, New Year’s Eve is my favorite holiday and I made a pact with myself several years ago, after a particularly boring one, that from then on I would celebrate it some place fabulous. The previous three countries that I was in were Spain, Australia, and Peru, thus Brasil seemed like the logical next country to go!

Once the tickets were booked, I began planning how I would spend my precious ten days there. I knew that I would definitely be in Rio on the 31st, but I wanted to see other places besides Rio. I spent countless hours perusing websites and books related to Brasil, which in the end helped me become more familiar with the country, however they confused me even more on where to go, as every place looked like Paradise.

Finally, I came across a website that had travel agents who were able to put together specialized trips for no extra cost. I emailed them stating that I wanted to scuba dive, spend New Year’s in Rio, and experience the Amazon in ten days time. I thought they would say that it was impossible, however within twenty-four hours they responded that this would in fact be possible and within one week the entire trip was planned (and for an awesome price). One thing that should be noted is that if you intend to take a lot of domestic flights within Brasil, you should consider buying the Brasil Airpass, which starts at four domestic flights for $500 and goes all the way up to nine domestic flights for $1100. I decided to purchase the four-flight package, as it would save me a lot of money. 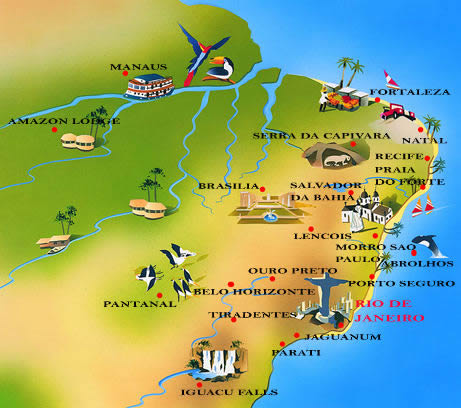 The cities that I would be flying to on my trip were: Recife, Rio, and Manaus.

Once my trip was completely booked, I decided to contact some people from Couchsurfing to see if they would like to meet up. To my absolute delight I discovered that while I would be there the first ever “Couchsurfing Pan-American” event would be held. There would be around six hundred Couchsurfers from around the world in Rio and daily events for all of us to attend. Knowing this helped my slight anxiety of traveling alone. This was to be my first solo-trip in a country where I did not speak the language. I had previously traveled solo in China, Argentina, and Australia. Those trips changed my life and instinctively I knew this trip would to.

While I love nothing more than to be surrounded by friends when I am traveling, I do crave my solitude as well. I truly believe that nothing teaches us more about ourselves than solo-travel. It pushes us in ways that are unimaginable and we learn things about ourselves that we never knew. Traveling alone is its own little niche of touching into a culture and most times you will attract more interactions amongst the locals that way. Besides you are never really alone; there will always be people around you and I think it is necessary for the growth of the soul to every once in a while pack your bags and go on a journey by yourself. This is exactly what my trip to Brasil was all about!