Currently, if you don’t know Kylie Kristen Jenner I think you are in the wrong generation. Kylie Jenner was born in August 1997. She is an American entrepreneur, model, TV reality personality, and socialite. Since, 2007, she has made an appearance in the reality TV show known as Keeping Up with the Kardashians. Together with her sister Kendal she made a deal with PacSun and came up with their own clothes. This was in 2012, three years later she started her own cosmetic company known as the Kylie Lip Kits currently known as Kylie Cosmetics. 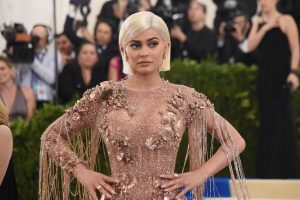 The Time Magazine in 2014 and 2015 consecutively rated Kylie and Kendall as the most influential teenagers. In 2018, she has 100 million followers on Instagram. In addition, in she was placed among the 100 Forbes celebrities being the youngest celebrity to be featured in the magazine. As per Forbes magazine she is worth $900 million because she owns 100% of Kylie Cosmetics.

However, how well do you know Kylie Jenner? As much as you think you know her maybe it only consists of 0.01% of the facts about her. Therefore, in this article, I am going to tell you about the ten most interesting facts about Kylie Jenner from TheStickyFacts.com and some other sources. They include:

Born into a family of celebrities, Kylie is the last born in her family. She only has an older sister Kendall. However, she has a long list of half brothers and sisters. She is still considered the youngest. This is because the other older than her.

Formerly known as William Bruce Jenner and now as Caitlyn Jenner, the father to Kylie is a retired Olympic gold medalist in the decathlon. In addition, he was a football player back in college. After he won the Olympic medal he was nicknamed “the world’s greatest athlete.”

Did you know Kylie has child known as Stormi Webster? Reports in 2017, said that she was expecting a child with rapper Travis Scott. They were not false this is because, in February 2018, Kylie gave birth to a beautiful girl whom they named Stormi Webster. However, before getting in a relationship with Travis she was earlier dating rapper Tyga.

Every celebrity wants to have a reality show about his or her life. However, for this young entrepreneur, she has her own TV reality show known as the Life of Kylie. This attracted more than half of his brother’s reality show the Rob & Chyna reality TV series.

It might be interesting for you to know where Kylie went to school if you live in Los Angeles. Kylie Jenner went to Sierra Canyon School where she was among the cheerleading team. However, later she deferred going to school and enrolled for homeschooling. From the home-schooling program, she completed her high school diploma in 2015 from Laurel Spring School in Ojai, California.

Apart from appearing in Keeping Up with the Kardashians, she has also featured in several Tv shows, music videos, and films. Kylie has made a two-episode appearance in the Kourtney and Khloe Take Miami. In addition, she has made an appearance in other TV shows including:

Moreover, she has made an appearance in various music videos such as Find That Girl by The Boy Band Project, Recognize by PartyNextDoor, Blue Ocean by Jaden Smith, Stimulated and Dope’d up by Tyga, and I’m yours by Justin Skye, and Come and See Me by PartyNextDoor. As an actress, she has only appeared in one movie the Ocean’s 8 that have been released this year.

Recognition is the best part or is what every celebrity desire. For Kylie Jenner, she has been nominated for the Teen Choice Awards for three consecutive years. From 2013 to 2015. Nevertheless, she has only won once even after receiving four different category nominations in the one award.

Even though she was more than famous for her age. Kylie has a number of close friends. I know you might challenge me, however, Kylie has the following close friend: Justin Bieber, Moises Arias, and Pia Mia.

In August 2018, Kylie was on the cover of Forbes magazine. Forbes approximated Kylie’s net worth to be $900 million. In addition, Forbes claimed that she is on the brink of becoming the youngest self-made billionaire. However, this was not received with positive reviews. People made it a joke and criticized the term self-made.

This made Fat Jew an American comedian to start a fundraising campaign to raise $100 million that would ensure Kylie becomes a billionaire officially. Nonetheless, even with this much criticism, her half-sister Kim Kardashian defended Kylie to being a self-made billionaire.

Even though success has come so fast for Kylie but she has had several lawsuits and civil disputes ranging from her products and trademark. In 2017, Vlada Haggarty’s lawyers claimed that Kylie has stolen their client’s creative style and aesthetic work. They claimed she stole the following: golden fingertips and dripping gloss lip. This case was later removed by the lawyers after Kylie credited Vlada for her creative work. However, this didn’t go smooth but she had to pay Haggarty.

In the same year, she also had a court case with Kylie Minogue for using the name Kylie as her trademark. This, however, didn’t go in favor of Kylie Jenner. The court decided that the trademark Kylie was only to be used by Kylie Minogue.

Troubles didn’t end for Kylie. Sara Hope filed a lawsuit challenging Kylie Jenner and NBC Universal for the use of a neon lip logo. I know these cases can be stressful for a young celebrity but she has carried on well and they have not affected her work.