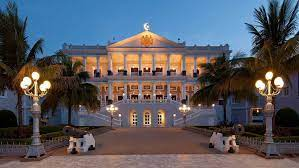 The beautiful city of Nizams, Hyderabad has an unmatched infusion of history and modernity. The pearl city of Southern India’s Telangana state has a history that goes back to 400 years. It has gained its popularity as a tourist destination due to its plethora of gorgeous palaces and other historical buildings. The majestic structure and exotic interiors of the palaces in Hyderabad remind us of its luxurious and glorious past that was opulent, ostentatious and extravagant.

In the present times, if you visit Hyderabad, you can still feel the royal vibe of the city, especially when you visit the palaces. Now let us take a walk through the city and explore the top 7 beautiful palaces in Hyderabad. Pick your favourites as you read on.

Building the Falaknuma Palace was the dream project of Nawab Vikar- Ul-Umra. Built in 1894, the palace is set 2000 feet above the city of Hyderabad. The nawab himself was the architect and designer of this grand structure. The design of the palace is inspired by Italian and Tudor architecture. The palace has 60 rooms and a jade room decorated with Belgian chandeliers and assorted gardens. Now, this heritage building has become an enchanting hotel that serves tourists who are looking for royalty and grandeur while visiting the city. Upon arrival at the hotel, the guests will be carried in a horse-drawn carriage and the hotel butlers will be ready to serve. Among all the other luxury hotels in Hyderabad, this is the most coveted one by the tourists.

King Kothi Palace, also known as the Nazri Bagh Palace, is situated in Hyderguda, Telangana. In this royal palace, the erstwhile ruler of Hyderabad, Sir Mir Osman Ali Khan lived from 1911 to 1967. Inspired by European style architecture, the palace was built by Kamal Khan. The entrances to the palace are arch-shaped. The interior is filled with intricate woodwork and canopied windows. The western part of the palace now has a Government hospital and the eastern part is considered as a residential property where Nizam private estates survived. The palace also has a Judi Mosque.

Purani Haveli is also popularly known as Masarrat Mahal Palace and is located in the old city of Hyderabad. It was constructed by Ali Khan Bahadur, Asaf Jah II. The palace is “U” shaped and has two oblong wings that run parallel to each other. The main building is built with inspiration from European architecture. The building architecture represents exquisite craftsmanship. Till now, Purani Haveli has remarkable popularity because of its exhibits of rich artwork and unparalleled talent.

Nawab Sir Nizamat Jung built the Hill Fort Palace in 1915. He stayed in this palace for 15 years before selling it to Asaf Jah VII. From that time onwards, the palace has been used as an official residence of the chairman of the City Improvement Board. The palace is spread across 6 acres and the design is based on the architecture of Trinity College, Cambridge. Until 1997, the palace was leased to Star Hotel. Currently, the property is owned by the Government of Telangana and is in dire need of restoration.

Chowmahalla Palace or Chowmahallat was once the seat of Asaf Jahi dynasty and was built between the years of 1857 to 1869. In the literal sense, Chowmahalla means four palaces. This magnificent monument has two courtyards and a grand dining hall. The past splendour of this palace is still intact. One of the heirs of Nizams, Barkat Ali Khan Mukarram Jah is still the owner of this palace. The palace interior has arches, domes and delicately carved artworks and designs surrounded by an outside full of fountains, lush green gardens, a Council hall and a clock tower. In current times, the courtyard of the palace has become a fairytale venue for exquisite dinner parties.

Asmangarh literally means “Home in the Sky”. The palace was constructed at a hillock by Paigah Noble Sir Asman Jah in 1885. He made the hilltop palace as place for recreation. The structure of the building was inspired by Gothic Revival Architecture. Later the palace was leased to the Birlas who turned it into a museum that displays the archaeological relics. Situated near Malakpet, the palace offers a great view of the surrounding forest and is one of the best tourist spots in Hyderabad.

Errum Manzil is a popularly known expansive palace situated in a hillock of Khairatabad or “red hill” of Hyderabad, Telangana. It was built in 1870 by Nawab Safdar Jung Musheer Ud Doula Fakhrul Mulk. The architecture of this place is inspired by the Indo-European Baroque style. When it was built, the palace had 150 rooms decorated with french furniture along with a Polo ground, a golf course, a stable of horses and a milk farm. The palace was used for all kinds of royal banquets and grand events.