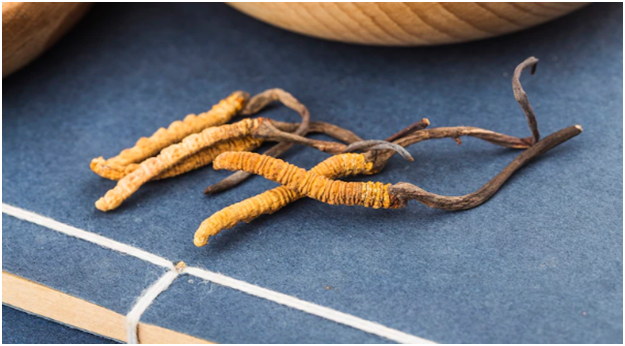 Around the globe, you may find a wide variety of Cordyceps mushrooms. Even though they don’t fit the mushroom mold, these fungi have the unique characteristic of being entomopathogenic, meaning that they develop as parasites on insects in the wild. Cordyceps Militaris and Cordyceps Sinensis have been the focus of substantial medical and scientific investigation because of their potentially life-changing effects on health and well-being.

Naturally occurring molecules in cordyceps increase the amount of oxygen in circulation, which is why it is widely believed that consuming cordyceps may help with vitality, endurance, and stamina.

Keep reading to uncover the top advantages of cordyceps mushrooms and some simple methods to include them into your health regimen, whether you’re searching for a pre- or post-workout supplement or a hidden weapon to charge through hectic days with the kids, back-to-back meetings, or double shifts.

Cordyceps Mushroom: The Force Behind Its Advantages

Cordyceps is a multipurpose fungus that offers low-calorie nourishment along with many other health benefits. In addition to vitamins and minerals, it also provides essential amino acids. The cordyceps mushroom is rich in cordycepin and other beneficial chemicals. Prebiotic fiber, which aids digestion and fosters good bacteria in the intestines, is one of its most valuable components. So, let’s look at some of the benefits of cordyceps mushrooms.

According to research, the cordyceps mushroom not only increases the amount of oxygen in the blood but also aids in maintaining a healthy heart and lungs. After 28 days, researchers discovered that cordyceps improved aerobic and anaerobic performance by lowering oxygen consumption and blood lactate levels, respectively, during high-intensity exercise.

●    It Helps You Recuperate Faster

Other research suggests the mushroom may also help lactate clearance by increasing blood flow to the liver and non-exercising skeletal muscle, enabling athletes to exercise at a greater intensity for longer without tiring out.

Cordyceps supplementation promotes healthy immune functioning by acting similarly to other valuable mushrooms. Thanks to the polysaccharides it contains, it promotes digestive wellness and aids in immune system regulation. Adaptogenic mushrooms like cordyceps help the body usually respond to threats like infection and inflammation.

Who Should Take Cordyceps Mushrooms?

While cordyceps’ inherent energy benefits sports, everyone may reap its benefits. Advantages of cordyceps mushrooms may be obtained by:

Cordyceps may be helpful in a wide variety of situations. There’s no better time than now to give cordyceps a try if you find that the stress of contemporary life saps your energy levels.

It’s no surprise that cordyceps mushroom supplementation has been so popular in recent years, given the fungus’s capacity to improve health in several ways, including boosting the immune system, increasing energy, and enhancing stamina.

Investing in the correct supplement from a reliable vendor has the potential to have profoundly significant impacts on your energy levels. It might be the perfect solution for you.