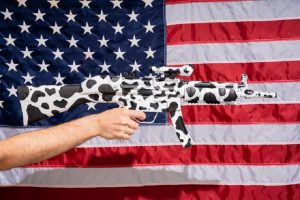 Photo by Ivan Samkov from Pexels

When purchasing a flag to support your Second Amendment rights, it is crucial to understand the difference between single-sided and double-sided flags.

It is because both of them are available in the market as well as online with different benefits. Each Pro Gun flag has its advantages and disadvantages, but the best choice for you will depend on your preferences, budget, and usage plans.

Most people are familiar with single-sided flags but may not be aware of the difference between them and double-sided flags.

This article will explain the differences between these two types of flags and suggest which flag display is proper for you.

What are Single-Sided Gun Flags?

What are Double-Sided Flags?

On the other hand, double-sided flags have two separate images sewn onto opposite sides of the flag. The first side is called the Header; this is the opposite of the “Fly” (the edge with the lengthwise grain).

After being sewn onto a header, another piece of fabric is sewn onto the opposite side (called the fly), resulting in two separate images on each side.

When Should You Use a Double-Sided Flag?

There are a few key benefits of using a double-sided flag when it comes to flying a flag. First and foremost, double-sided flags are much more visible from a distance. It is because the design on both sides of the flag can be seen simultaneously.

In addition, because both sides of the flag are equally visible, double-sided flags are less likely to be accidentally turned upside down.

It is an important consideration when flying a flag, as an upside-down flag can be seen as a sign of distress. Finally, double-sided flags are also more durable. They are less likely to tear or become damaged when flown in bad weather.

When Should You Use a Single-Sided Flag?

According to the rules, when a patriotic effect is desired, a flag may be displayed 24 hours a day if properly illuminated during the hours of darkness.

Single-sided flags are best used in situations where only the front side of the flag will be visible. It could include indoor displays, parade floats, or small boat flags.

While single-sided flags are not as visible or durable as double-sided flags, they are still an excellent option for specific applications. If you’re looking for a flag that will be seen from only one direction or that will need to be flown in bad weather, then a single-sided flag is the best option.

Since they only have one image, they are less likely to confuse other flags or create optical illusions.

How Do They Differ?

The primary difference between single-sided and double-sided flags is the image on the backside of the flag.

Which Flag is Right for You?

Both single-sided flags and double-sided flags have a place in flag displays. The type of Pro Gun flag you choose will depend on the circumstances.