On my last morning in Cuba, I experienced the country at its most frustrating.  After eating a delicious Cuban breakfast at our casa and saying our sad goodbyes to Sergio, Miriam, and their daughter, we departed for the airport.  We checked in with the airline and got through customs with no problem.  I wanted to get rid of as much evidence as I could of me being in Cuba before returning to the United States, so I spent my last few CUC$’s on a book (Gabriel Garcia Marquez’s “One Hundred Year’s of Solitude” in Spanish) and a salsa DVD, only to find out five minutes later that our flight was going to be delayed for seven hours.  !Ay Dios mio!  Now, I was stuck at the airport with no money for food or drink and I was going to miss my connection in Cancun.  Normally I would not have been too distraught over a delayed flight, since I am a seasoned traveler and have accepted that this is a part of traveling, however I had my final exams of the semester of Graduate School scheduled for the next day and they could not be missed under any circumstances.  I excused myself from Kristin and some other Americans that we had befriended and went to sit alone for a while to regain my composure.  I calmed myself down by listening to Buena Vista Social Club on my iPod and reading my book of the trip that was fittingly named, “Es Cuba: Life and Love on the Illegal Island,” written by Lea Aschkenas.  Travel did not protect you from the dark side as you wished it would.  It merely allowed you to experience everything, the good and the bad, more fully and deeply. 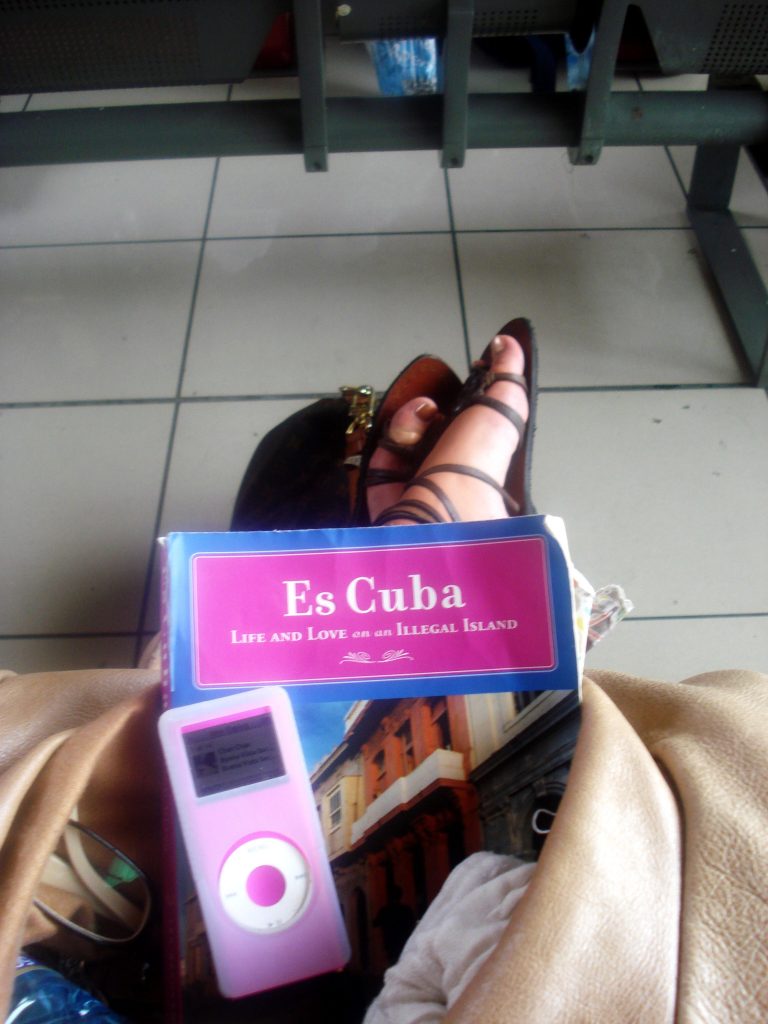 After a while I came to terms with the fact that there was nothing I could do about the situation and I did not want to let it ruin my unforgettable time in Cuba.  Those seven hours in the airport afforded me a time to reflect on my trip.  The island was full of life and desperation at the same time.  Surrounded by tropical heat, the beat of salsa music, dilapidated architecture, and the constant presence of political unease; in Cuba I had the constant feeling that something was just about to occur, because in a place so full of uncertainty the only thing that was for sure was that something inevitably would happen!

As we were finally boarding our flight we discovered that the reason for the flight delay was due to the wheels of the plane catching on fire upon landing and they desperately had to search for new wheels to replace the charred ones.  If you find yourself on a Cubana flight in the future all I can say is buena suerte!

Prior to our trip, Kristin and I researched how to avoid getting our passport stamped twice in Mexico.  We both came to the conclusion from everything we had read and heard first-hand that the customs agents in Mexico would see our United States passports and know not to stamp them again.  Wow, were we wrong!  Apparently, you need to place at least 20USD$ in your passport when you hand it over to the agent as a bribe.  Neither of us had any money left and begged the agent to mercifully let us pass through without the stamp, but to her we were just two rich gringas that deserved a little lesson.  After much begging, she eventually let us choose which page the stamp would go on and we both chose pages that were covered in stamps in hope that the second stamp would go unnoticed by United States custom agents.

The United States State Department’s official policy has been that the embargo we have against Cuba is purely economic.  Therefore, it is not illegal to visit the country, rather it is only illegal to spend money there, which of course we did and is completely unavoidable.  There is a hefty fine and possible jail time for those caught.  I was convinced that everything would work out in the end and I tried my best to convince Kristen’s troubled mind as well.

Unfortunately, the Jetblue counter was closed by the time we reached Cancun.  Thus, we would have to wait until the morning to try and get on the next possible flight.  I was determined to have Cubana pay for our hotel room and although it took over an hour to get my wish, not only did Cubana pay for our hotel room, but they also paid for our dinner and breakfast the next day!

Afterward:  After the disaster we had the previous day, we needed good news and good news in abundance is what we got.  We left for the airport immediately after breakfast in order to be the first in line at the Jetblue counter.  For a small fine, we were able to get on the first flight out that day.  Miraculously, my cell phone, which never works in a foreign country, had a signal and I was also able to call my Graduate School and let them know that I would not be sitting for my exams.  I received a slap on the wrist, however they allowed me to make them up later in the week (and I passed!).  In the end, not only did the United States custom agents not see our two Mexico stamps, but I was able to smuggle in my 30 Cuban cigars without getting caught!