When you think of road trips, Ireland is not usually the first place that springs to mind. But with its rolling green hills, winding country roads, breathtaking scenery, ancient ruins, and beautiful castles, Ireland offers a stunning and relaxing road trip itineraries to satisfy every traveler. 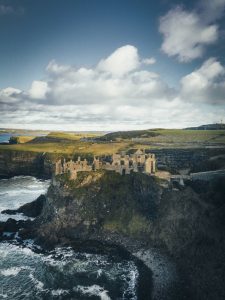 The Emerald Isle is relatively small and yet is rich insights. This makes it absolutely ideal for driving around. You don’t need to worry about long eight hour hauls along busy superhighways; this is casual, relaxed driving with something extraordinary to see around every bend. Generally speaking, the M roads (or Motorways) aren’t the soulless expanses you’ll find elsewhere in Europe. So whether you take the larger roads or smaller regional routes, you’ll find the driving pleasure and relatively stress-free.

So why not stow your luggage in the boot, hop in a car and get in the slow lane. Of course, every great road trip needs a theme, so here are some road trip itinerary ideas to whet your appetite.

Give Me Castles – 1 week

If ever a place was blessed with castles, that place was Ireland! Start your road trip bravely – with Trim Castle, which is where Braveheart was filmed. It is everything you want from an imposing thousand-year-old castle. Expect to be whipped by wind and greeted with steel grey clouds as you tour this extraordinary castle, which is only an hour from Dublin.

Other brilliant castles to visit are in Kilkenny, a beautiful town in its own right which is also home to the famous brewery of the same name. Nearby is the Rock of Cashel, sitting impressively at the top of a hill and surrounded by rolling green countryside.

Another hour south will bring you to Blarney Castle, just outside of Cork. Legend has it that anyone who kisses the Blarney Stone is blessed with eloquence – although keep in mind you have to do it upside down!

Driving to the other side of the country north from Cork will take less than two hours. Near Limerick, you’ll find Bunratty Castle. It’s not as impressive as some of the ancient buildings, but it has been restored to its medieval splendor. You can get a glimpse into how the castle would have actually looked in the 15th century. The adjoining Folk Park is a living reconstruction of 19th century Ireland, complete with village shops, homes, and even a post office.

No Irish road trip is complete without doing a loop around one of the peninsulas. From Galway, take the Connemara Loop – it’s not as well-known as the Ring of Kerry or Dingle Peninsula, but offers sensational views and beautiful sights. One of these is Kylemore Abbey, which looks like something out of a fairy tale in its woodland setting. If you prefer your castles to be a little older, the ruins of Rinvyle Castle gaze gloomily out on to the Atlantic Ocean.

The best part is that from here, you can complete your loop and return to Dublin in less than three hours.

Fancy being a princess? A number of castles in Ireland have been converted into hotels and guest houses, offering a range of accommodation options. Be sure to check them out!

Most road trips will start and end in Dublin, famous for its rich history and bustling nightlife. The city’s most popular attraction is the Guinness Storehouse. But unless you have a deep love of the dark brew, give it a skip and head to one of the distilleries instead.

The Jameson Distillery started operating from Bow Street in 1780. The building is now home to five interactive whiskey tours which will get you up to speed on its more than 230 years of history. Or if you have more modern tastes, the new Teeling’s Distillery also offers tours.

Once you’ve taken in the historic sites and bustling nightlife, it’s time to leave the city behind. Hop in your car and head west. Just 2 hours away via the R156 road, you’ll find Kilbeggan Distillery, with its timber water wheel and the option to bottle your own whiskey. Another 15 minutes drive will bring you to the more famous Tullamore Dew Distillery, resplendent on the banks of the Grand Canal. If you decide to do both tours on the same day, you should probably consider a private car or taxi service!

Time to head south to the Walsh Whiskey Distillery in County Carlow. It’s only a few years old but is located in the beautiful Royal Oak Estate. The centerpiece of the estate, Holden House, dates from 1755 and is currently being carefully restored.

Want to see more? If you haven’t had your fill of whiskey, the Slane Distillery is an hour north of Dublin, while the Connacht Whiskey Company is in the northwest of the country, around 3 hours from Dublin.

Ireland is famed for its dramatic coastal routes. A week or two isn’t enough to take in their full majesty, but you can still cover a lot of ground in a few days. The Wild Atlantic Way stretches 2600 kilometers down the west coast from Derry to Kinsale, and the most popular roads are the ones south of Galway.

Their popularity means that these roads are busier than other routes. However, they also cover the most famous spots – the Cliffs of Moher, Dingle and Kerry. Expect beautiful winding roads, small coastal villages, friendly locals and a real sense of adventure. Ruins dot the landscape and sheep wander peacefully. Even at its busiest, you’ll always find a nook to call your own.

Starting in Galway, you can make your way south over four days down to Kenmare and the Ring of Beara. This ring road is much less busy than the other rings and the roads are so narrow that buses aren’t permitted. At the very peak of the ring, take Ireland’s only cable car over to Dursey Island, before heading back to Glengarriff for a well-deserved pint.

A car gives you the ultimate freedom. Ireland is small enough and packed so full of sights that you can happily throw the itinerary out the window (but no littering please!). Pack your sense of adventure, bring your best pal, and hit the road without a care in the world. Outside of the major cities, accommodation is easy to find and even the smallest village will offer a B&B. If you want to drive but don’t like the hassle of planning everything yourself, you can always book a planned self-driving trip through Ireland, with the itinerary, car rental and rest stop planned for you. It’s a perfect plan for the slightly lazy yet independent traveler. Or stop in a pub and ask a local for a recommendation and you may find yourself somewhere truly magical. But then again, anywhere in Ireland really is.