Sadly, my friend who I was traveling with, Kristen, was not feeling well, but we wanted to do something special for our last night in Agra and to celebrate our extraordinary day at the Taj Mahal.  While lounging by the hotel pool, we decided to watch the sunset at the Agra Fort and then to have dinner and drinks at The Oberoi, which is considered one of the most luxurious hotel’s in all of India.

We were warned by the concierge at our hotel that the Agra Fort would be closed by the time we arrived at 6PM, however his warning was completely inaccurate.  It did not close for at least another hour and I believe that we went at the best time.  The weather had cooled down and there were hardly anyone there.  Normally, I am a planner and researcher when it comes to all things travel, but I must admit that I knew nothing about the Agra Fort before we arrived.  I must also admit that it was quite thrilling to not know what to expect (this is something I never thought I would say)! 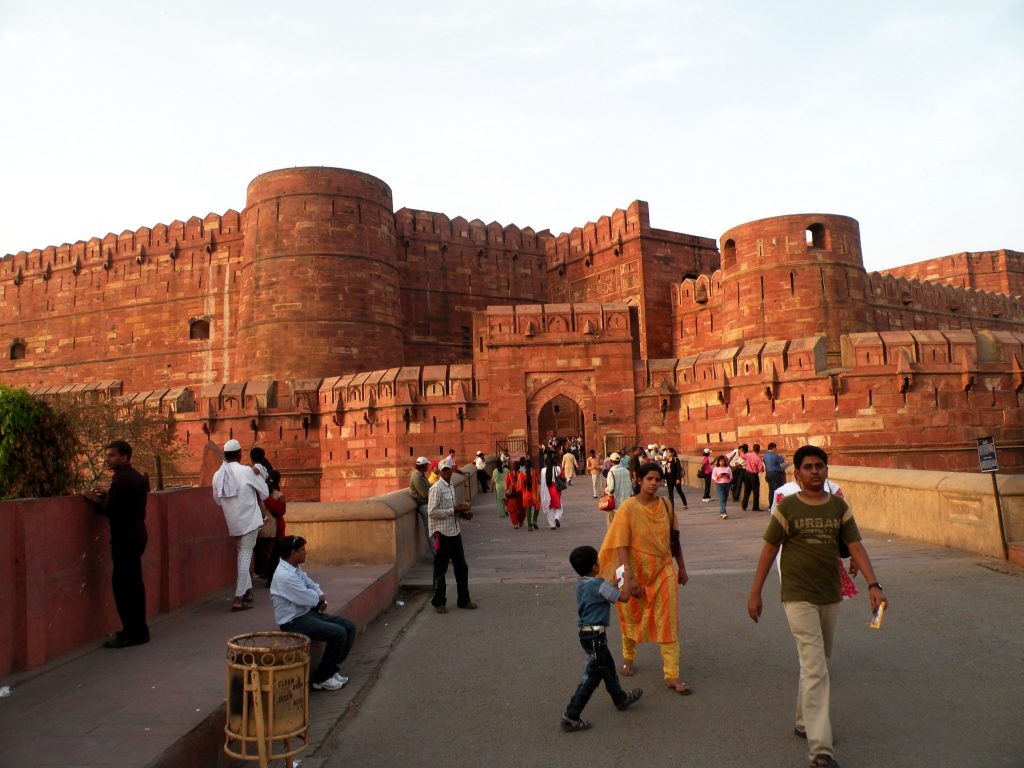 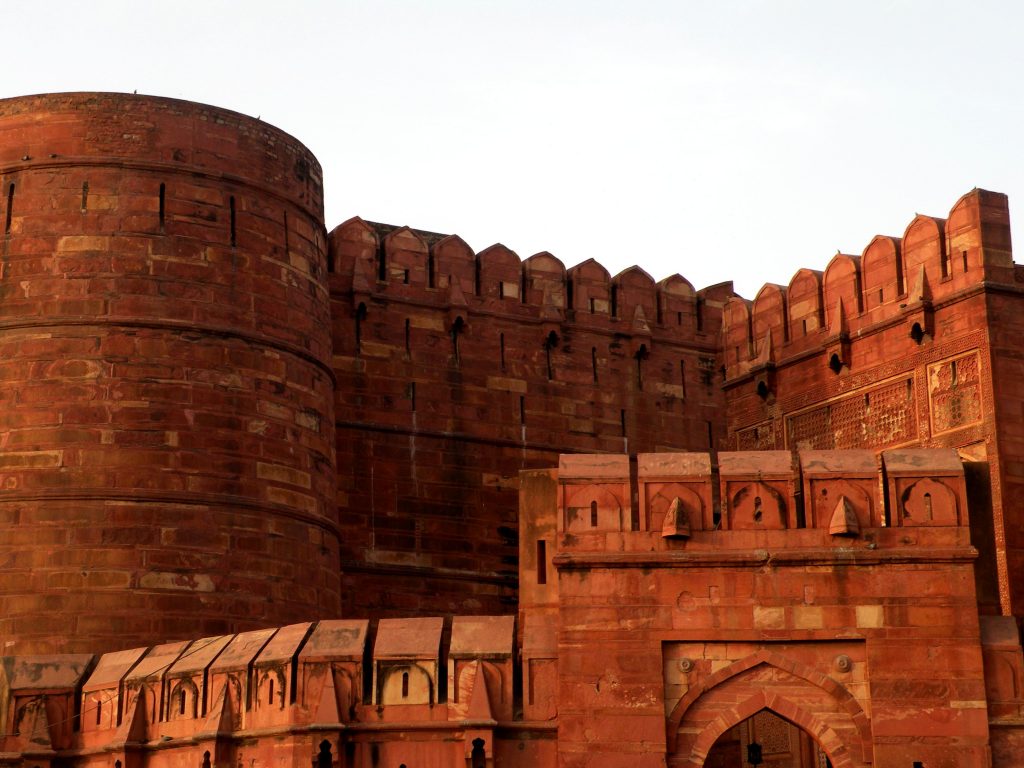 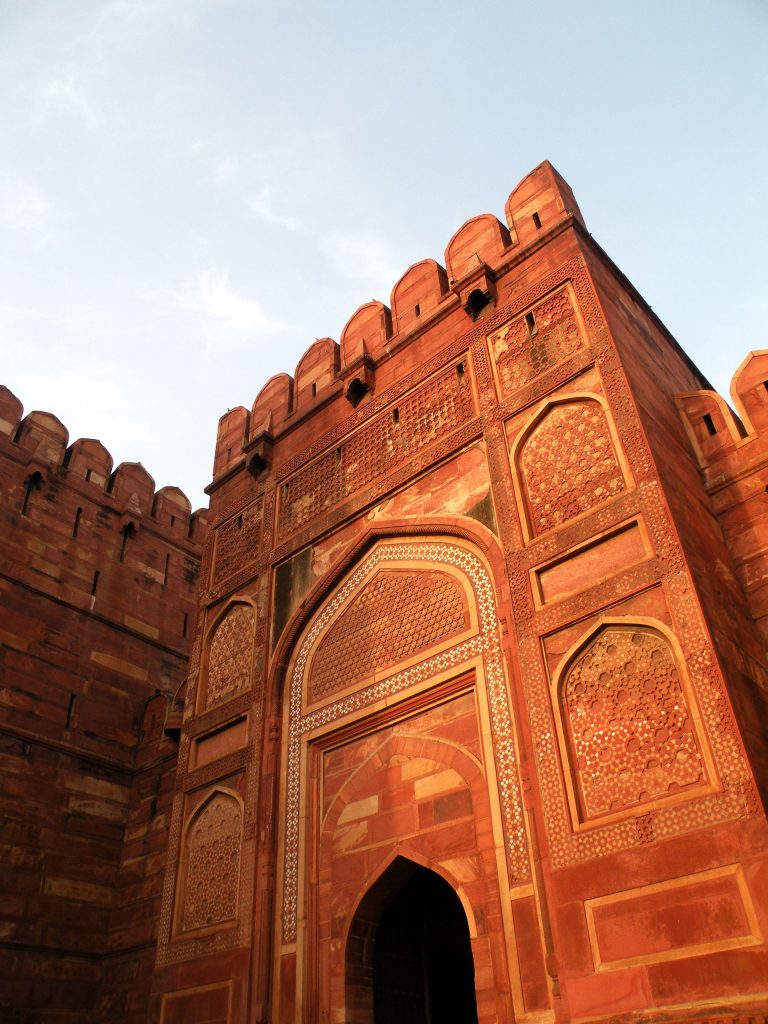 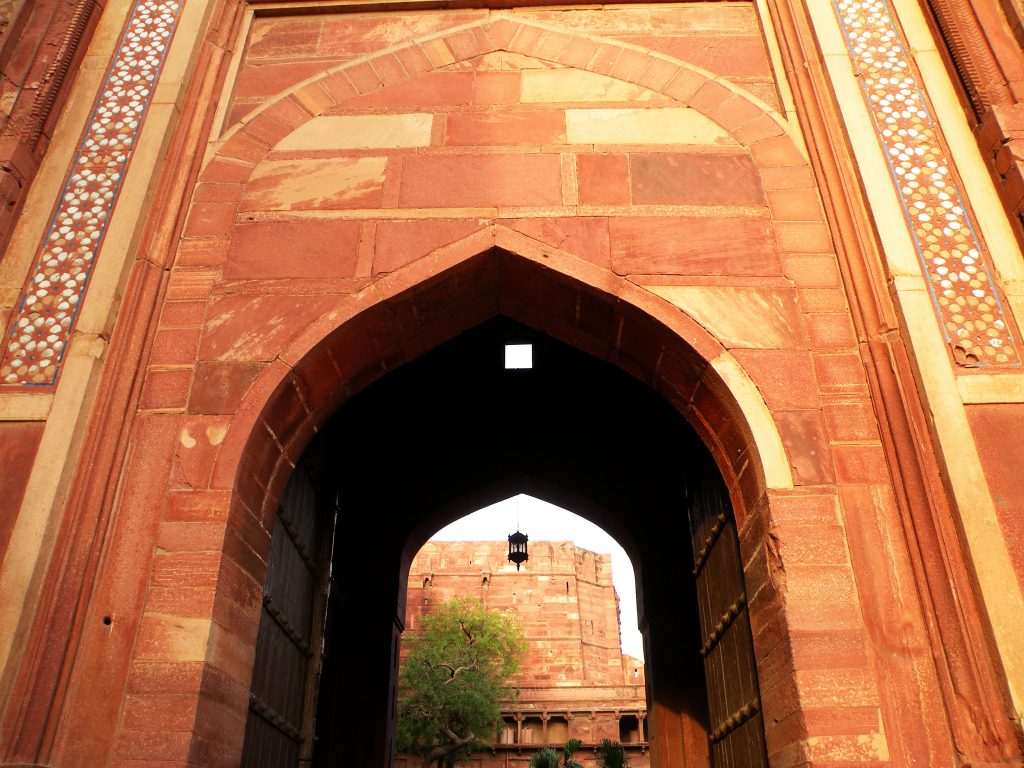 The fort stretched for miles and while it was no Taj Mahal it definitely was worth the visit.  Between the way the light illuminated the amber color of the fort and the monkeys jumping from tree to tree, it felt like we were in another world. 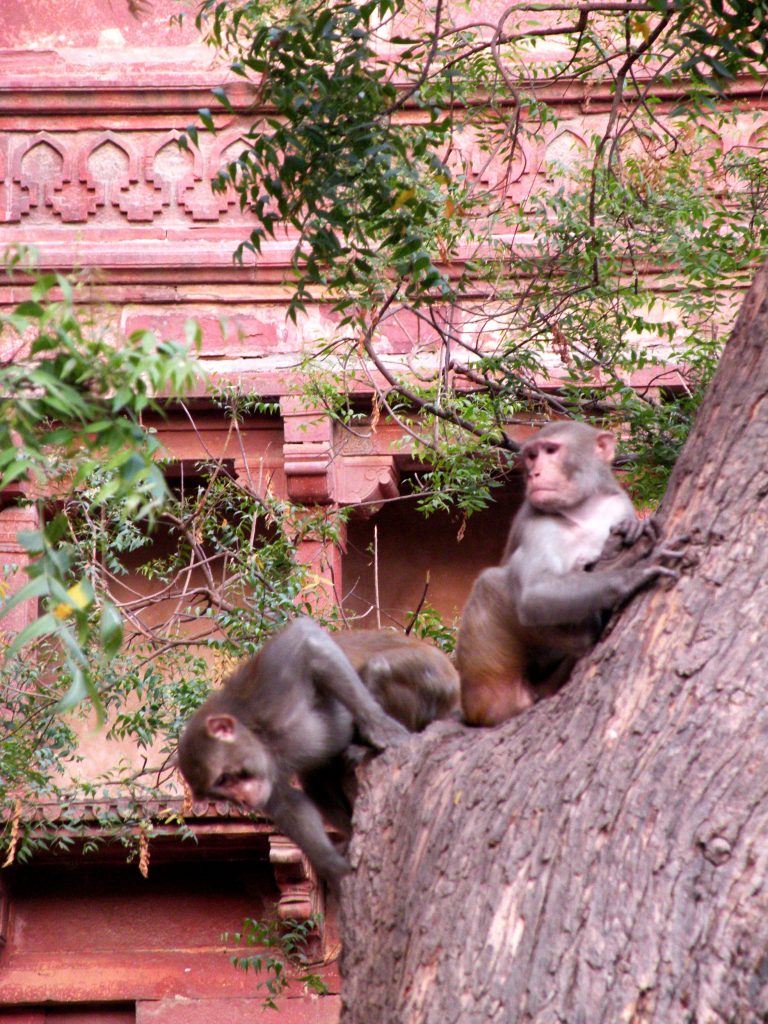 Why don’t I take you for a stroll through this other world. . . 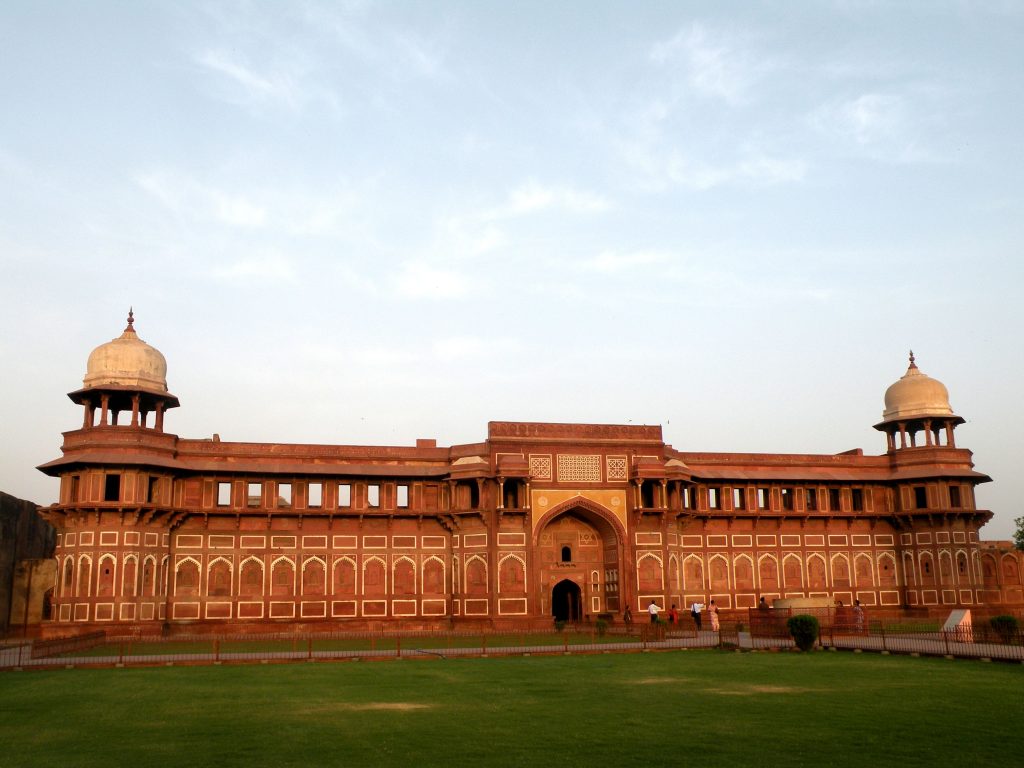 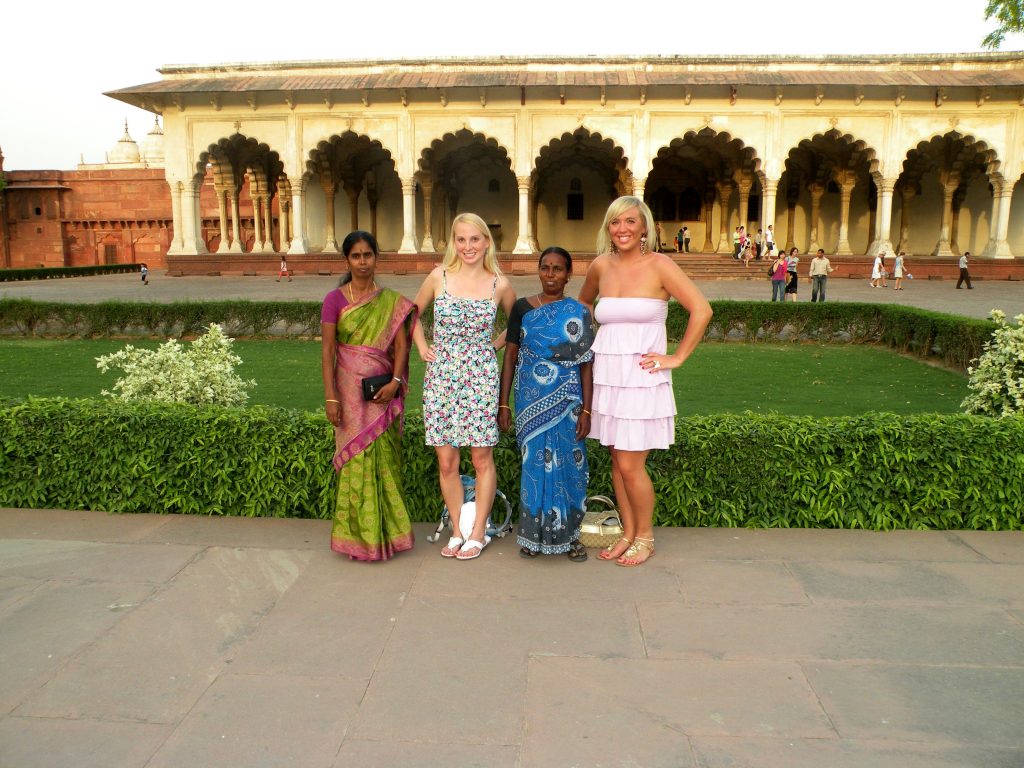 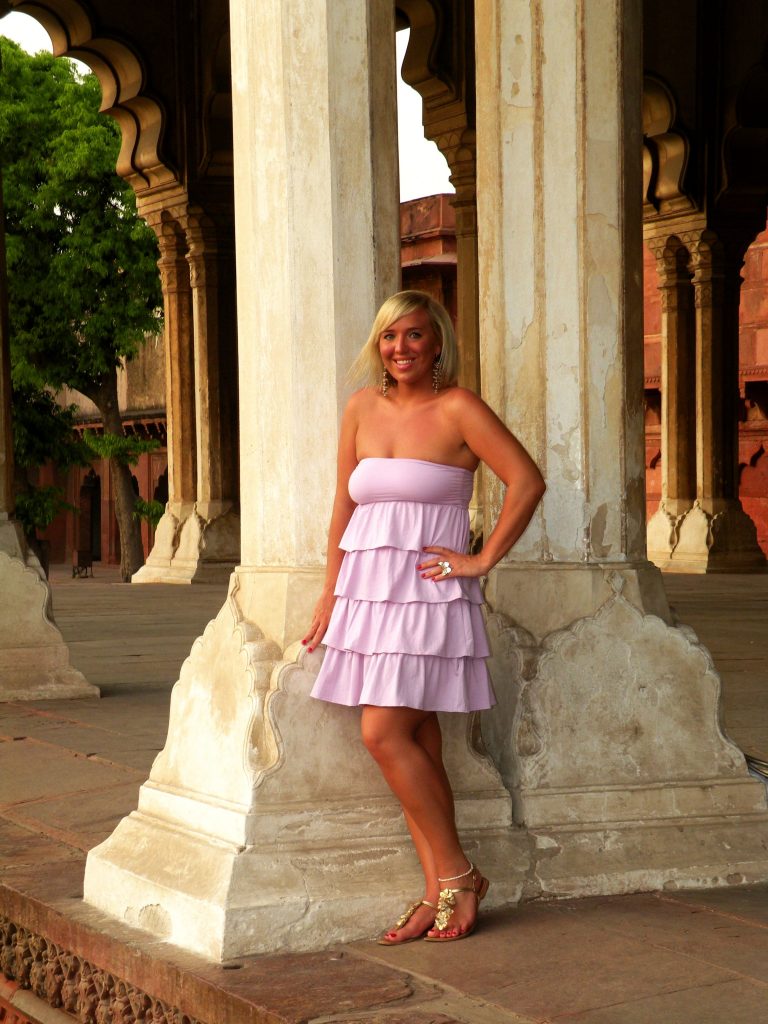 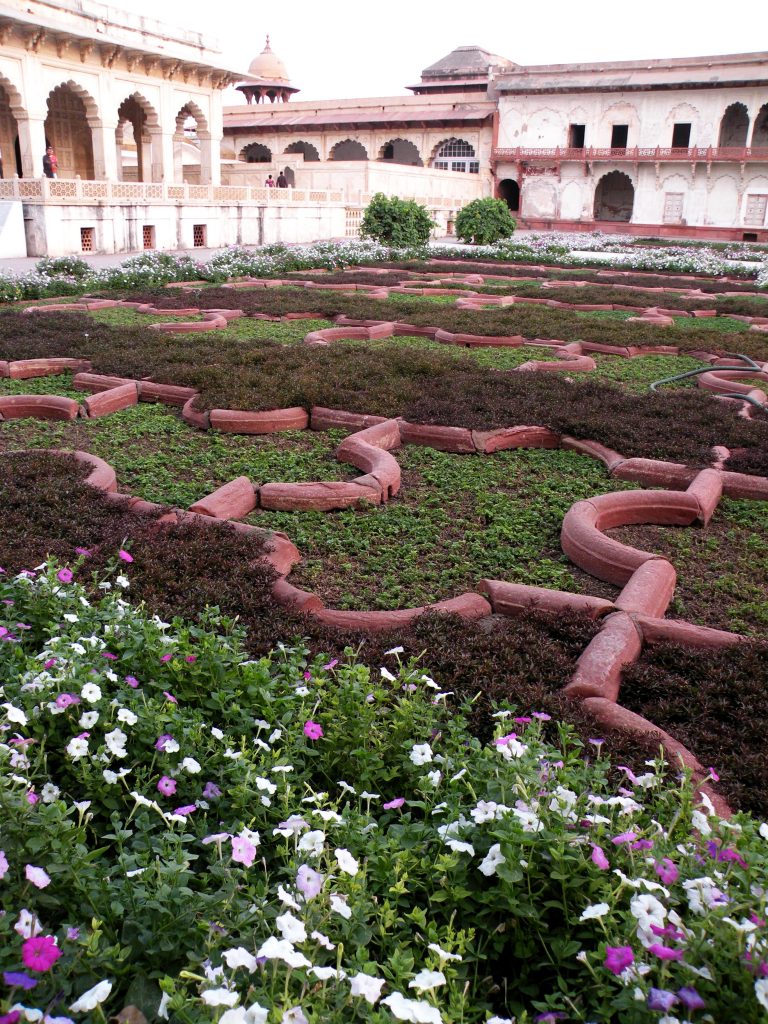 I was already enchanted enough with the Agra Fort, but imagine my surprise when I discovered that from one of the rooms I could see the Taj Mahal in all its glory! 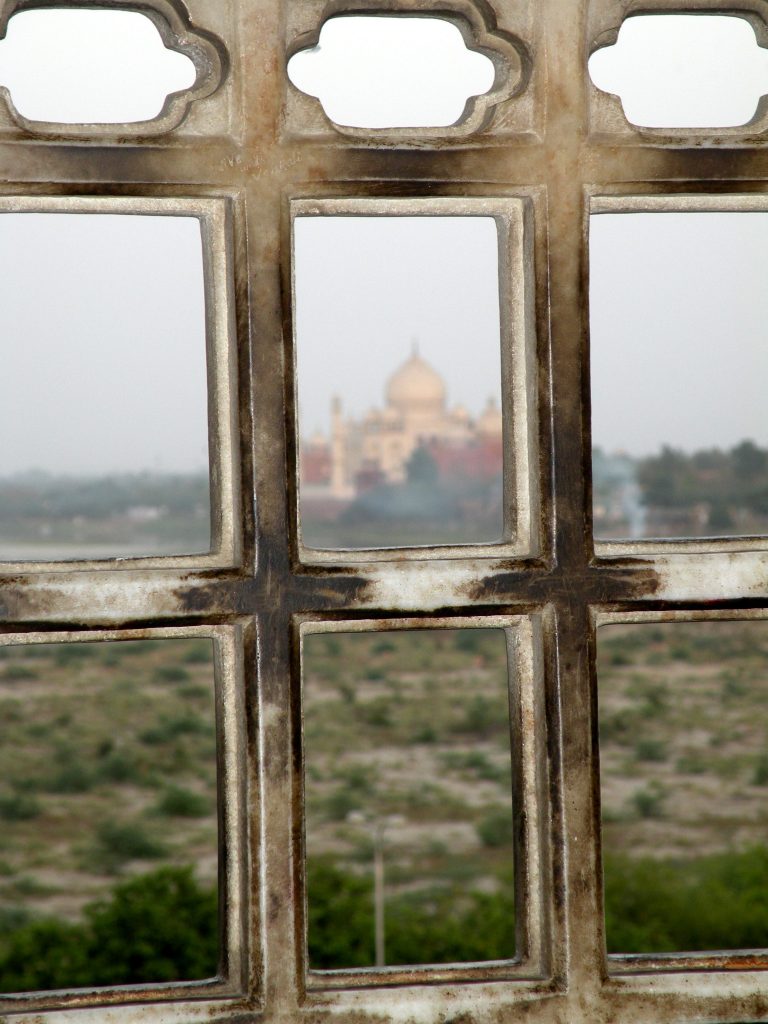 In the midst of me trying to get the perfect photo, I overheard a guide tell the people in his group that the smoke surrounding the Taj Mahal was from a cremation that was taking place.  It felt like such a holy moment that I just had to put down my camera to honor it. 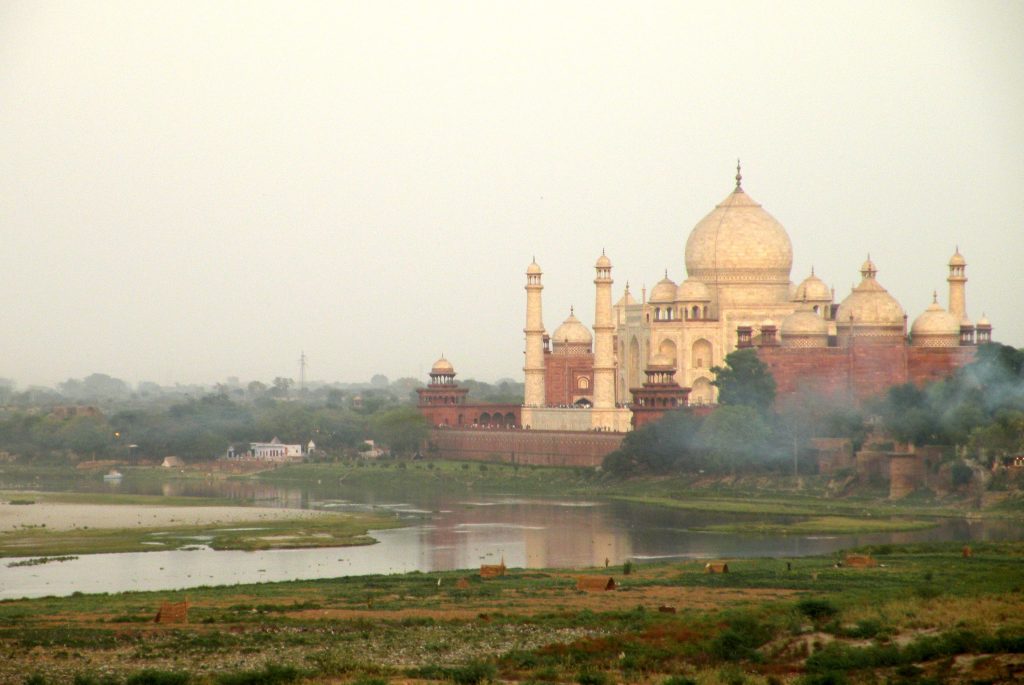 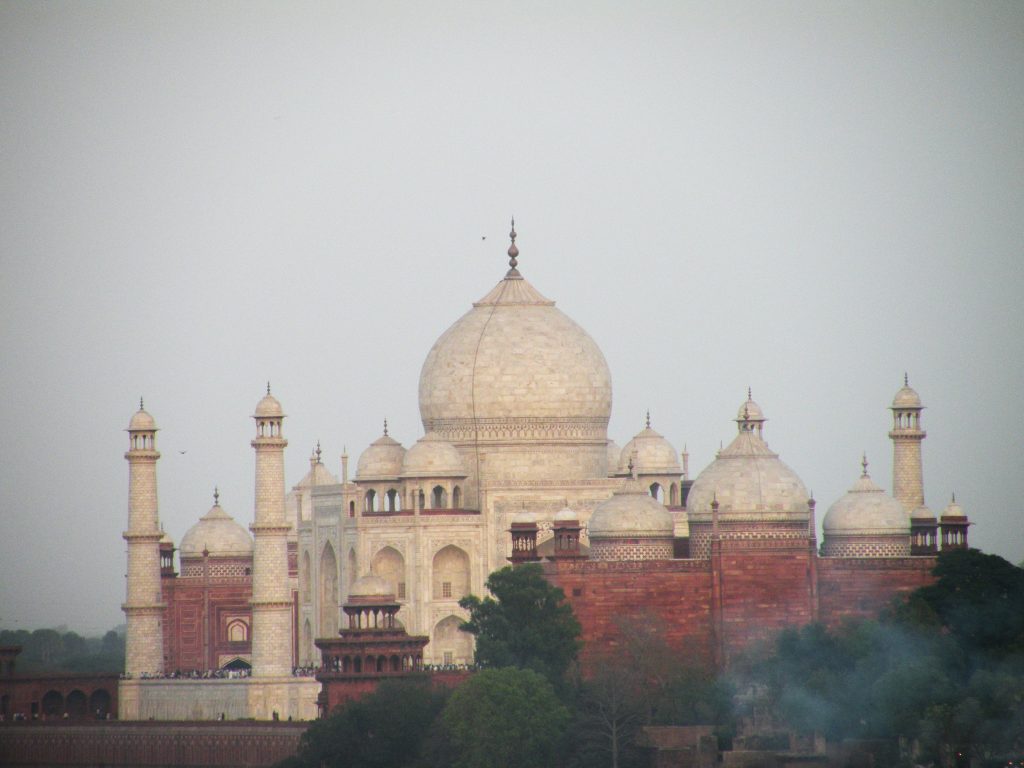 Then the sun began to set, turning the sky into a rich amber color almost matching the Amber Fort perfectly.  It was as if everything became one.

I could have easily stayed there for hours contemplating the oneness, except our driver was expecting us to return to the car.  On our drive to The Oberoi we happened to get a quick glance at one of the two elephants that roam the streets of Agra.  He is considered to be the city’s pet. 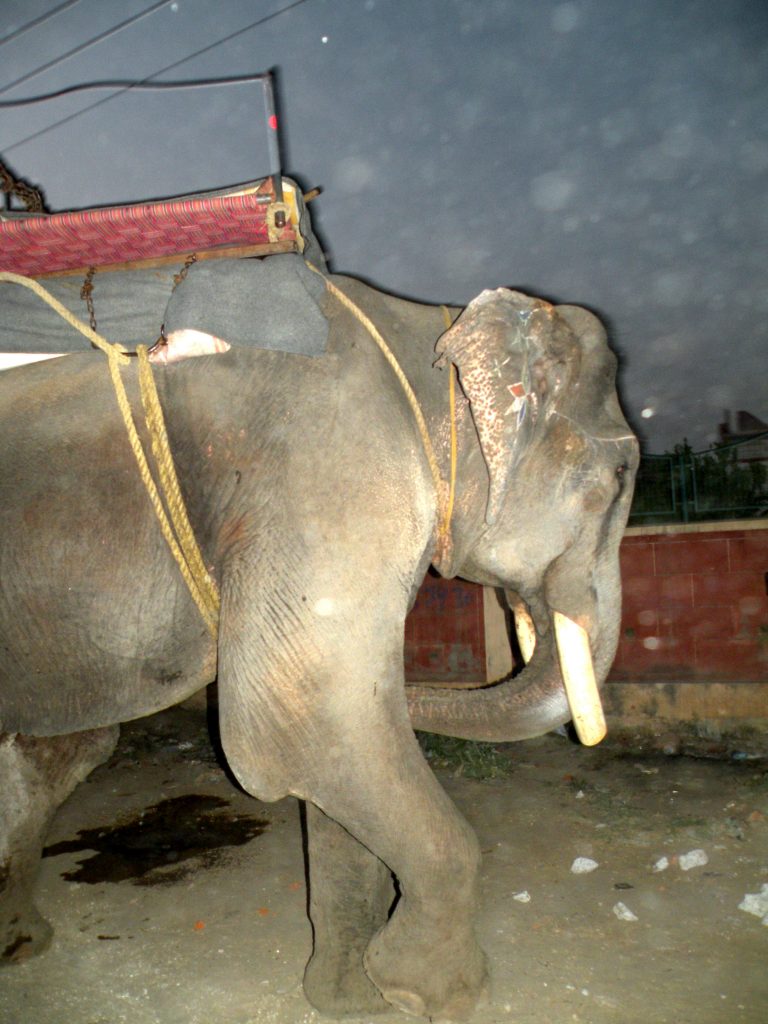 As our car pulled up to the hotel, I was instantly taken aback by the opulence.  It was without a doubt one of the most stunning hotels I have ever seen.  I think it would be impossible to not feel like royalty if you stayed there. 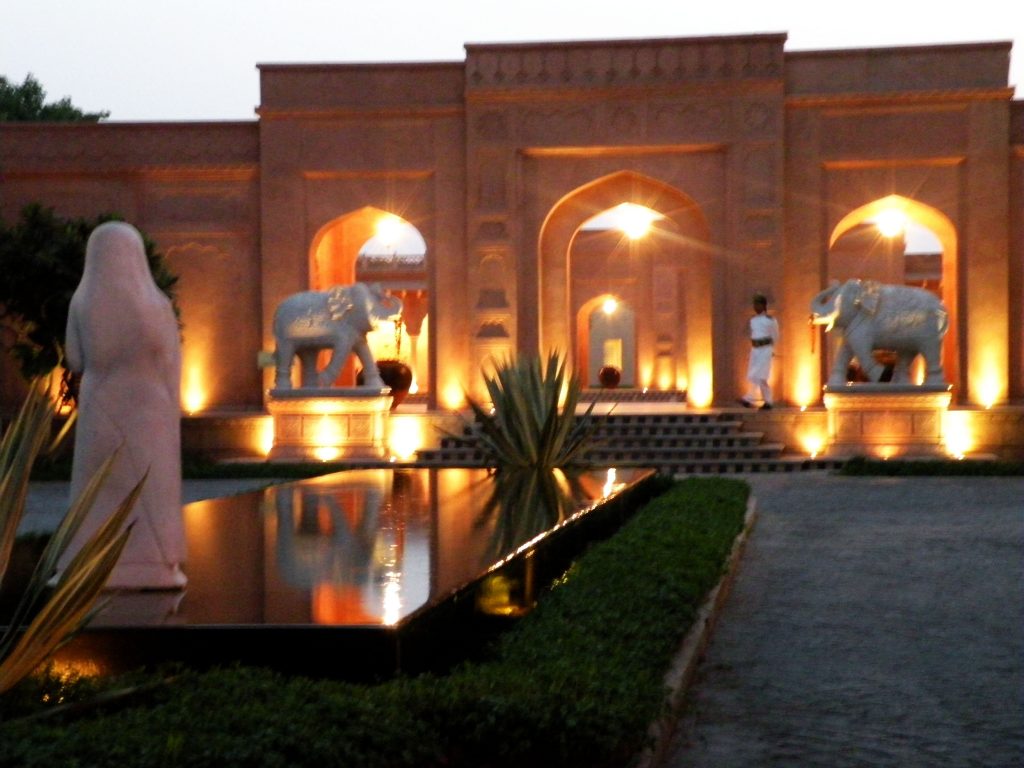 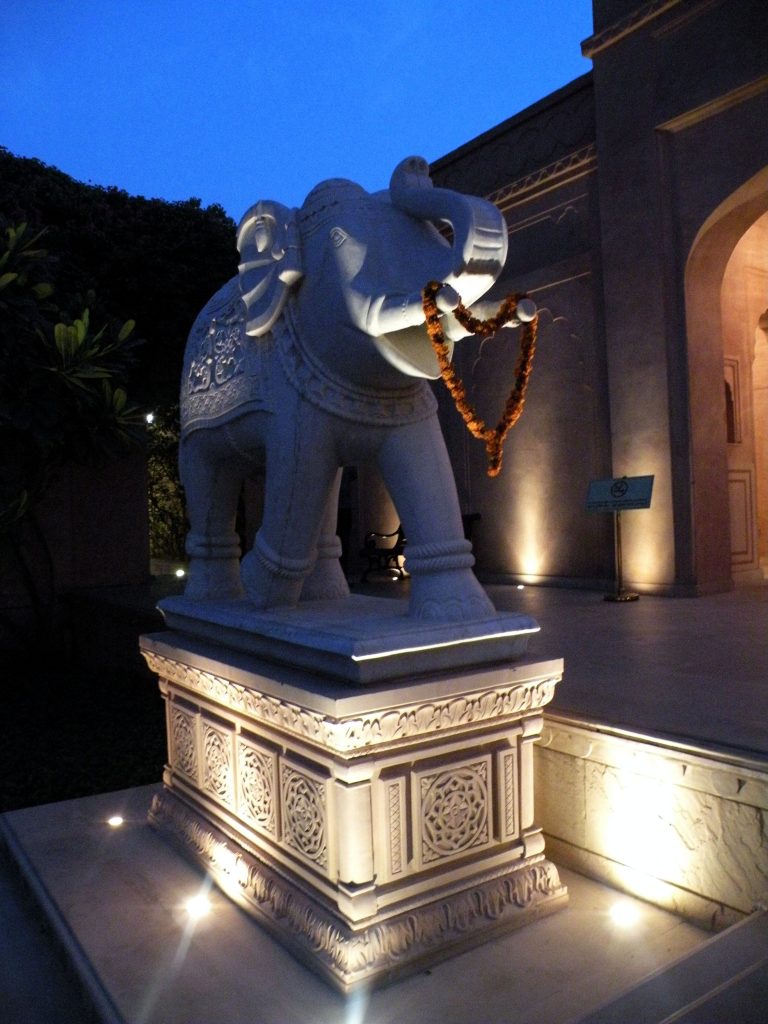 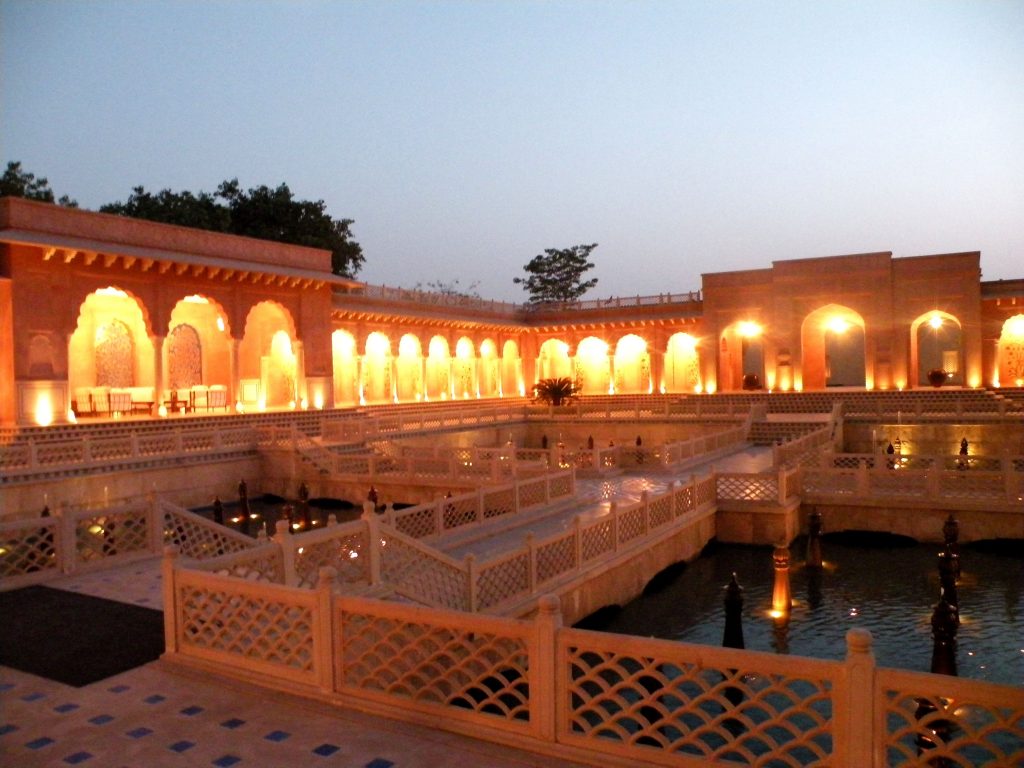 While the dinner Kristen and I enjoyed at the hotel was not the best culinary experience of our lives, it certainly was delicious and it was the perfect setting to honor the incredibly memorable day we had experienced and would never, ever forget.