“If we truly want to know the secret of soulful travel, we need to believe that there is something sacred waiting to be discovered in virtually every journey.”

Prologue: When I stepped foot for the first time exactly five years ago in South America, I was definitely on a journey for the sacred.  I had just painfully ended a six year relationship and while I was slowly healing with each passing day, I was ready for my heart to be filled with passion for life again and I knew that traveling would be the exact catalyst I needed.  I sold my engagement ring and bought a ticket to Buenos Aires, Argentina.  Little did I know that not only was I going to fall head over heels in love with the city, but also with the man of my dreams there.

“Our story” that took place over the last half decade is one that deserves to be written about and shared with the world and that is exactly what I intend on doing one day in the form of a romantic travelogue.  For now, I will say there were of course ups and downs due to the long distance, but our love was strong enough to make it work in the end, as you will see in the upcoming posts.

Seven months ago I took a life changing solo trip to Brasil.  Brasil is one of those places where you find yourself pondering selling all of your belongings and moving there immediately to live out the rest of your days.   So, when my Argentine boyfriend, Lucas, suggested we meet in Brasil only four months after that trip, I did not hesitate before saying sim!  The only thing I requested was that we visit a city neither of us had been to before.  We researched the perfect place for our rendezvous and eventually settled on Buzios, a city two hours north of Rio de Janeiro.

Lucas and I wanted this to be a special trip, thus we decided that we would splurge on luxury accommodations.  I asked several of my Brasilian friends for their top choice and every single one said Casas Brancas.  Thankfully, due to it being the off-season they still had a room available for an affordable price, as I was only giving them two weeks notice.

As my plane arrived in Rio, I truly felt like I had returned “home.”  My flight arrived earlier than Lucas’ and so I found myself a coffee and waited on the other side of customs for him while soaking up the energy of Brasil.  It had been almost a year since I had seen Lucas, but when I was finally in his arms it felt like we had only been apart for one minute.  Casas Brancas sent us a car and before I knew it we were on our way to Paradise.

Buzios has become a playground for Cariocas wanting to escape the urban life of Rio.  It is a peninsula with over twenty beaches tucked into its curves and coves.  Some of the beaches are less than a hundred feet wide, while others are more than a mile long — each one offering its own charm.  We intended to explore as many of them as we could over the next five days.

As our car pulled up to Casas Brancas I was not sure which sight to marvel at: Buzios or the pousada?  Both met my definition of perfection. 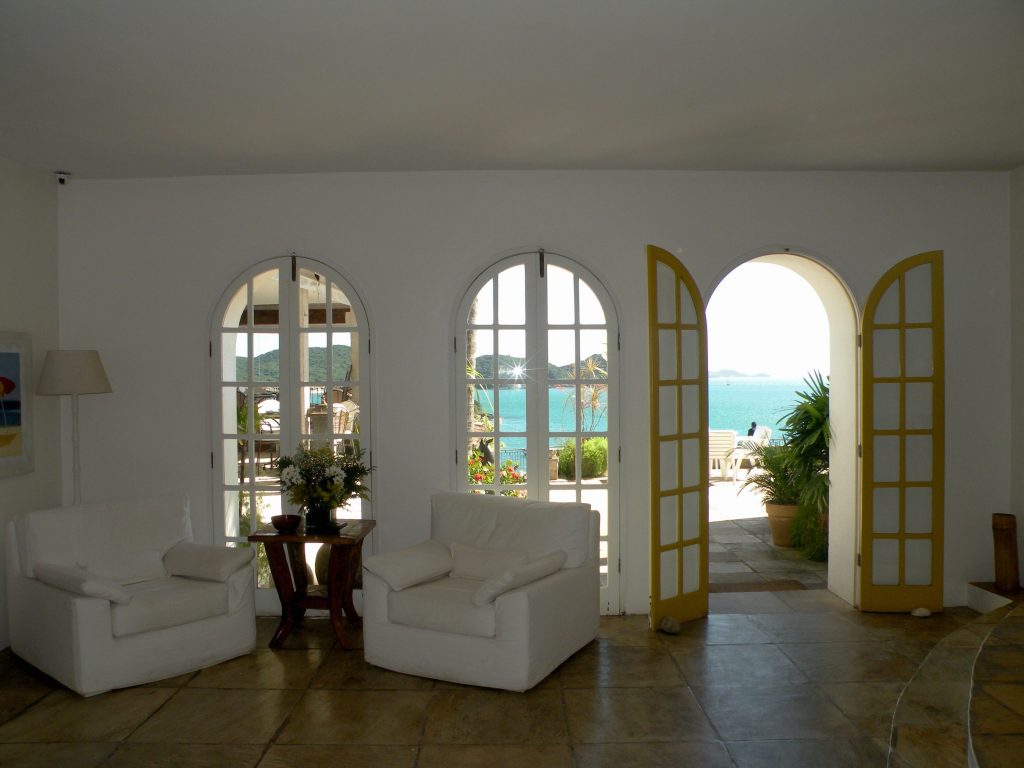 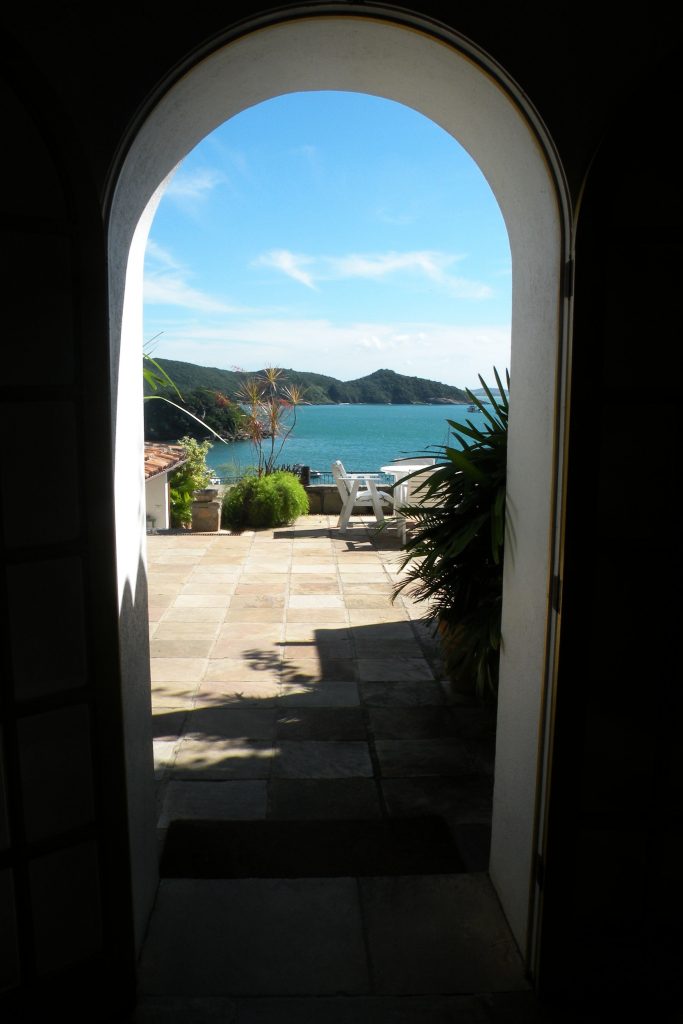 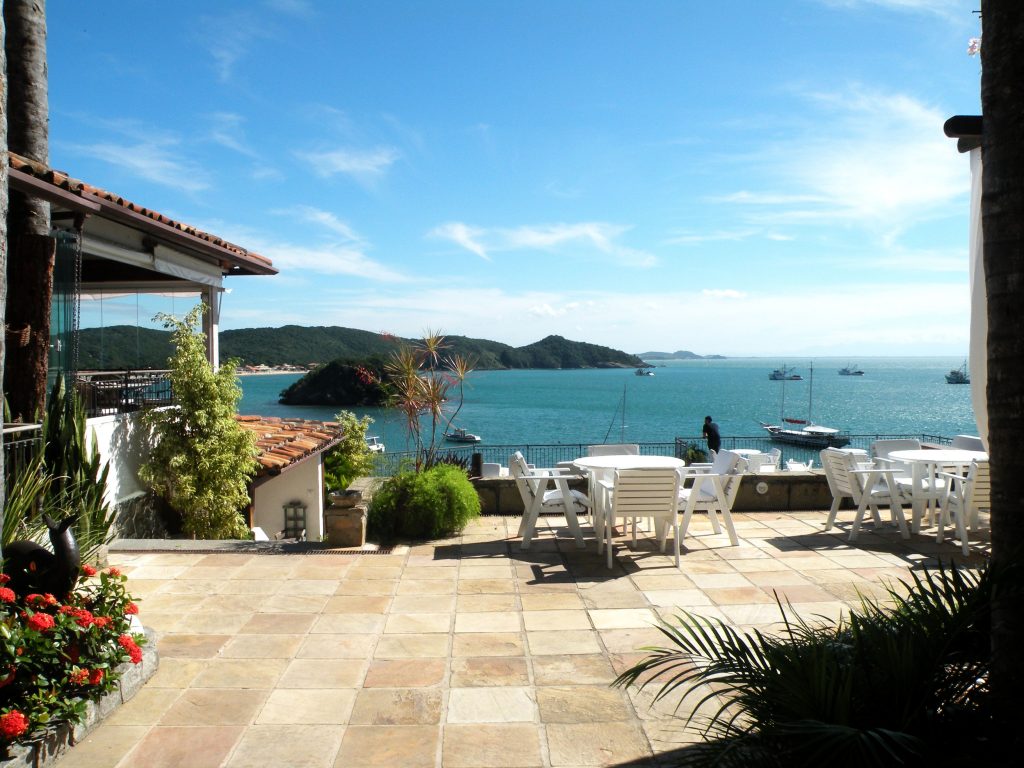 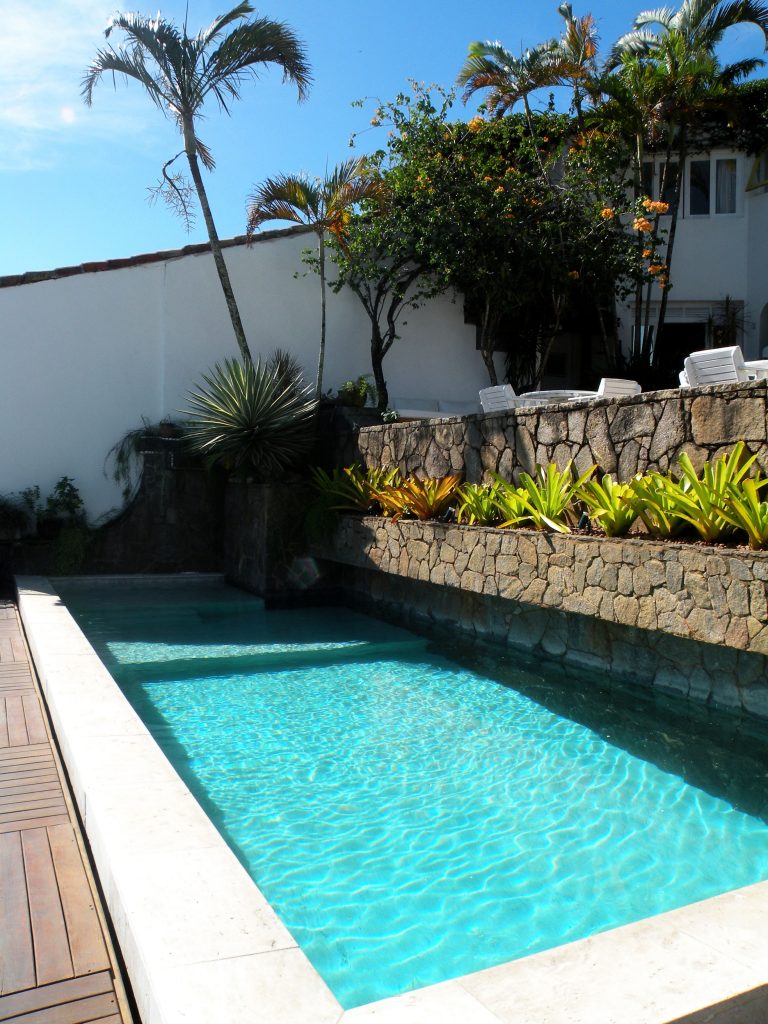 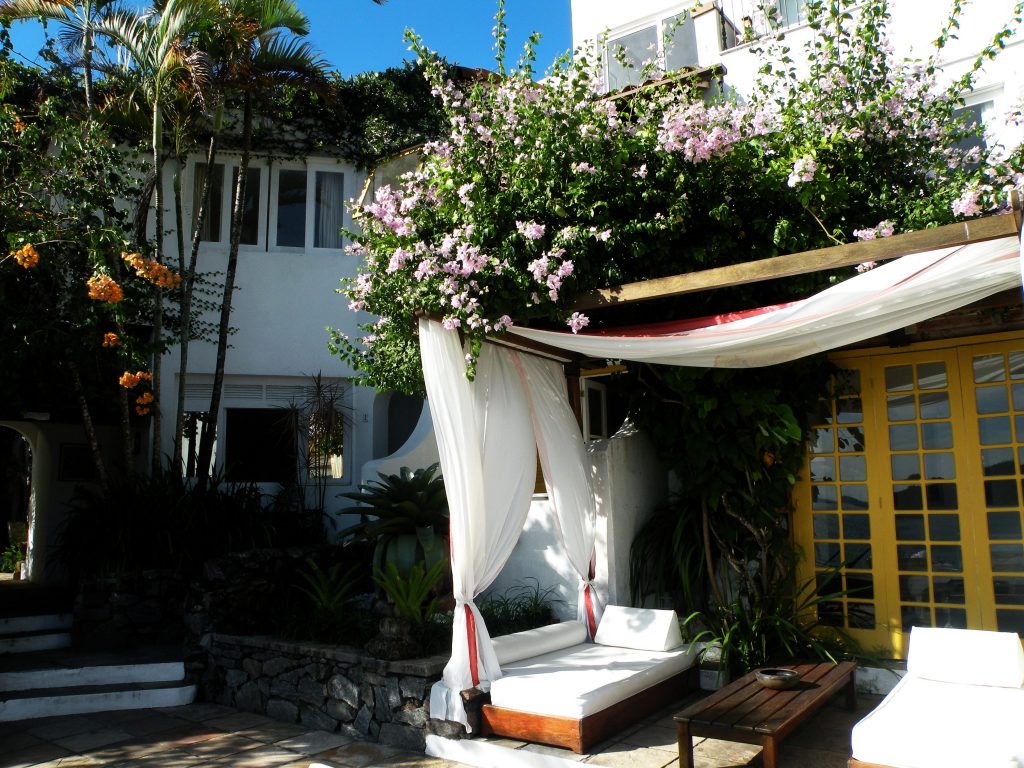 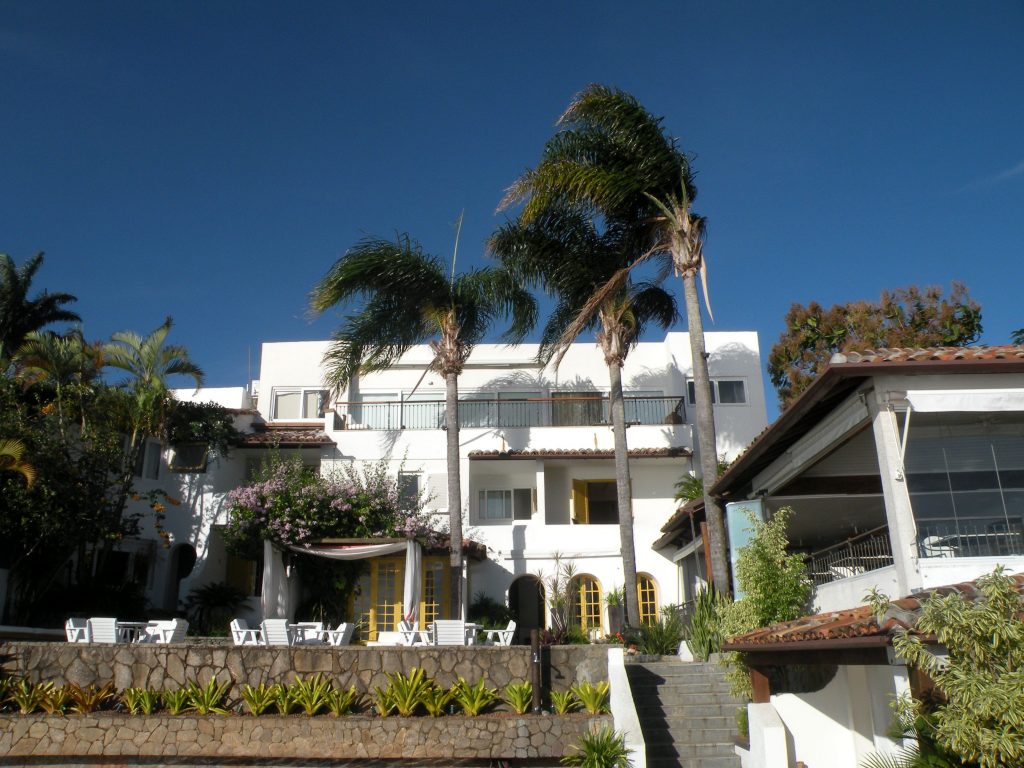 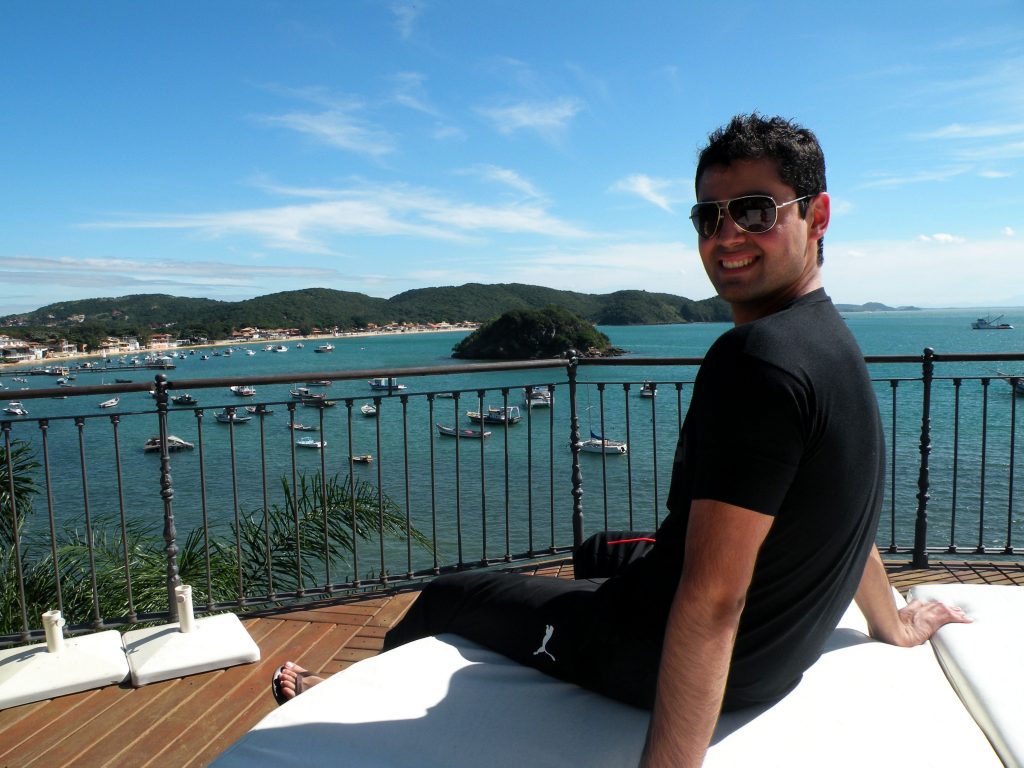 There is a sensation that we explorers get, I would liken it to a “traveler’s high,” when we find ourselves in a place that feels so right that the thought of leaving is almost painful.  That is exactly what I was feeling while looking out onto Buzios Bay. 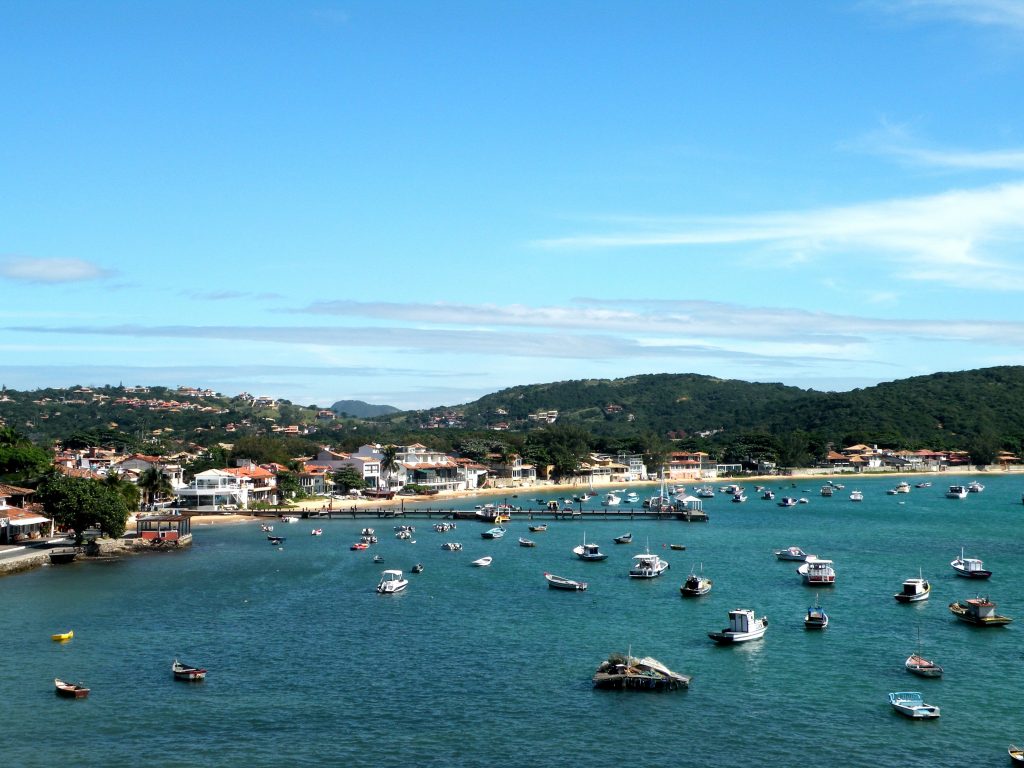 Our room was not quite ready, so we continued to wander around the grounds taking pictures, as well as drinking caipirinhas.  Yeah, it was barely 11AM, but when in Brasil, do as the Brasilians do, right? 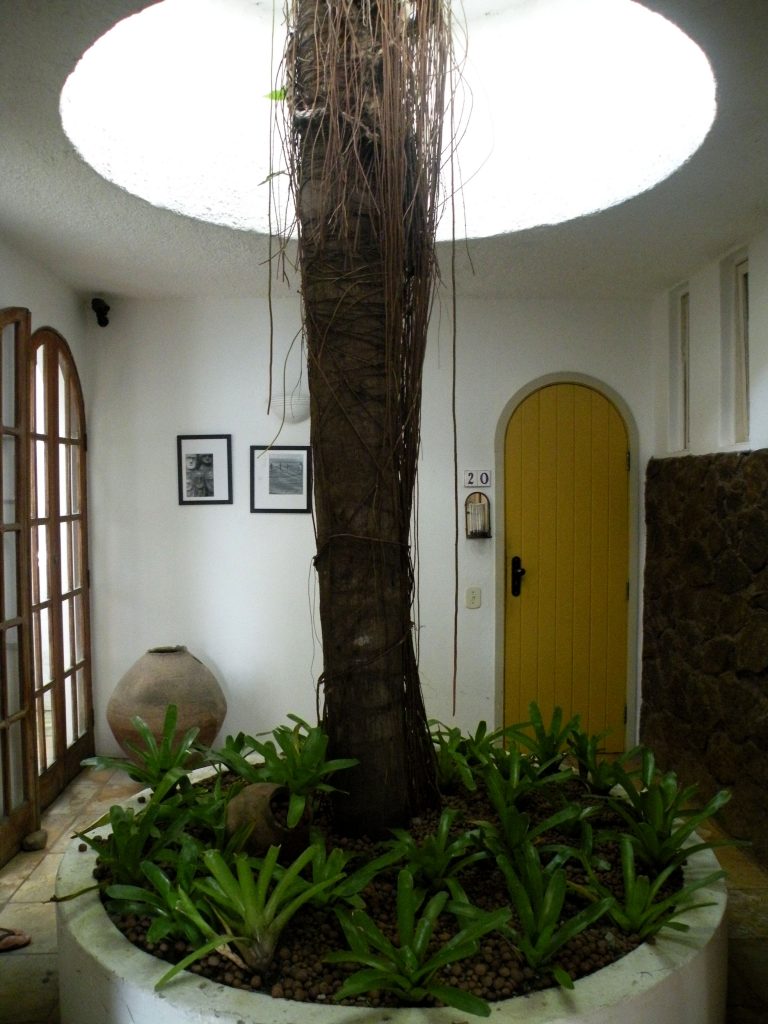 Once we were let into our room, I can promise you it did not disappoint.  Unfortunately, I did not think to take pictures of the room itself, as I was too preoccupied with the view from our private veranda. 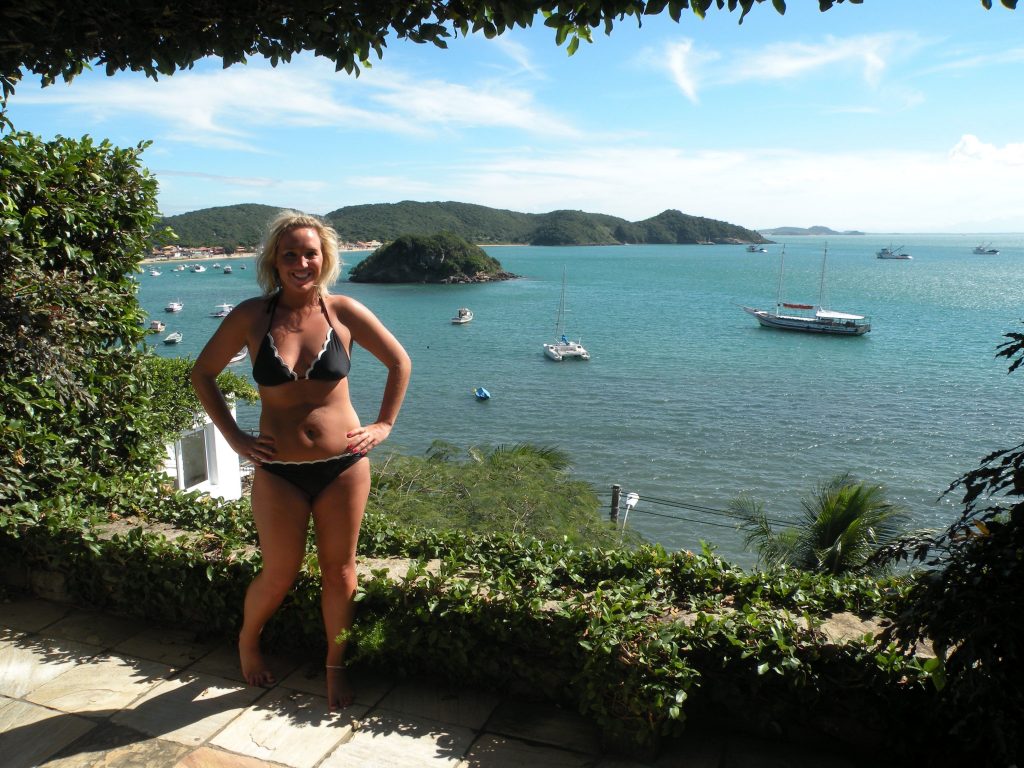 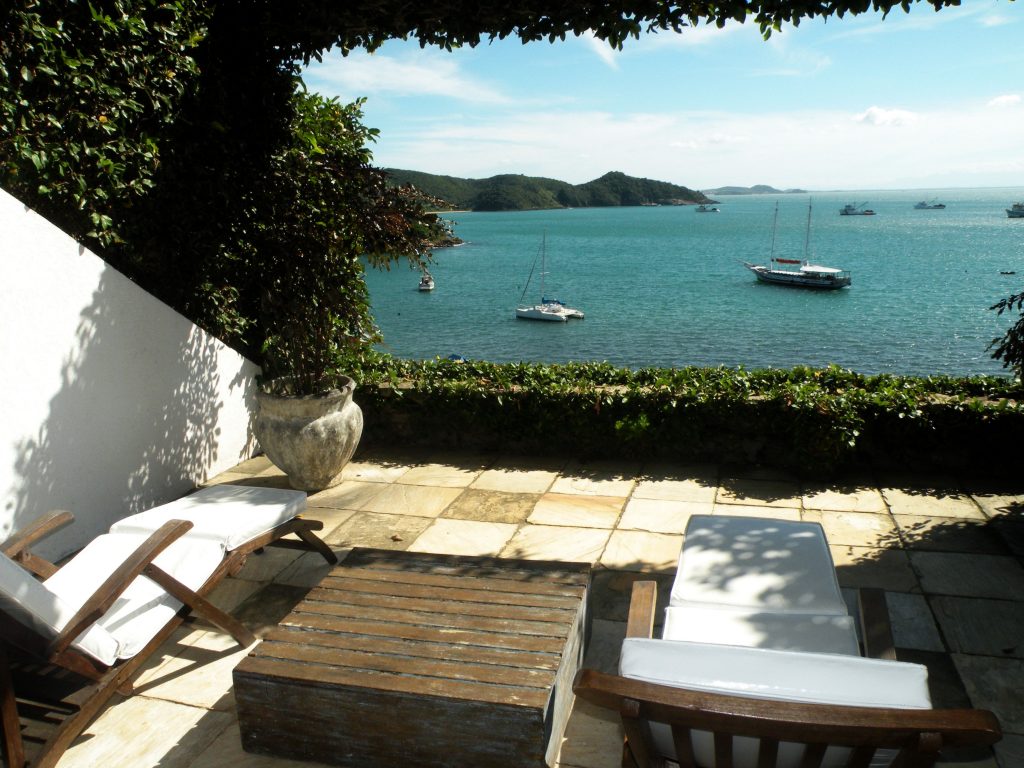 We relaxed into our lounge chairs and pondered how we should celebrate our first day together again. . .