Now, when Madam Winter has gone away, we run outside as children to greet young and shiny Lady Spring. The concentration of the hormones in the air in the Spring reaches the highest mark and nobody can avoid it. What a babyish joy is to smell the blooming trees and tulips in the night air, while walking through the park. Furthermore, can you imagine a romantic trip in the best season of a year with someone you love? In Ukraine, there are a lot of places impregnated with romantic spirit and shrouded in old legends — places where you can feel the aura of true love and happiness. So, if you do not know what to do during your trip, here is a list of top five most romantic places in Ukraine:

Let us start our romantic journey from the Tunnel of Love, a marvelous place located on the railway track between villages Klevan and Orzhiv at the Rivne Region. The fine-arched tunnel is a botanical phenomenon about 4km long created by the Mother Nature. There is a legend saying that if a couple in love will pass through the tunnel and make a wish, this wish will be granted. Some newlyweds even plant their flowers there to symbolize their feelings. This destination suits perfectly for those who prefer to go out of a town. 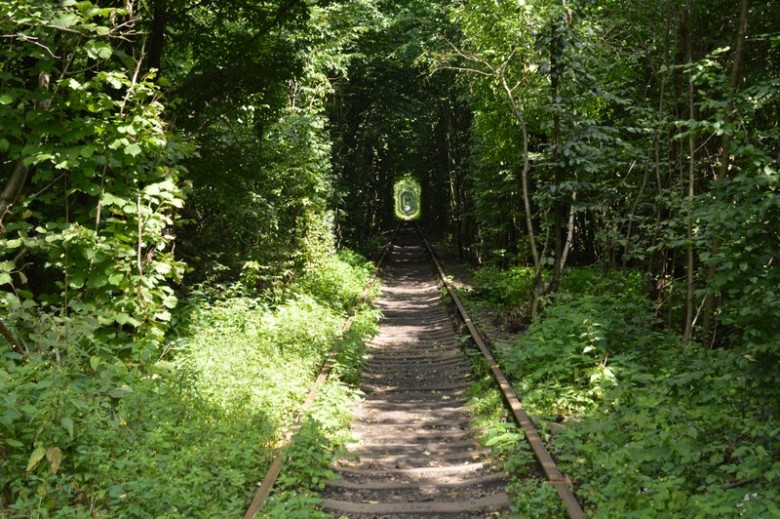 The next stop on our map is the pedestrian Bridge of Lovers located near Mariyinsky Park in Kyiv. It is undoubtedly one of the most romantic places of the capital. The bridge is covered with padlocks and love inscriptions from couples all over Ukraine. On the 7th of May 2013, there was a monument installed near the bridge in the name of love of Luigi Pedutto from Castel San Lorenzo in Italy and Mokrin Yurzuk from the village in Kamenetz-Podolsk Region in Ukraine. They had met at the POW camp in Austria in 1943. Only love helped them to survive in the camp hell, but after the war Mokrin returned home and the lovers were separated for a very long time. They met again in 2004, after almost 60 years apart, proving that time and distance have no power over love. 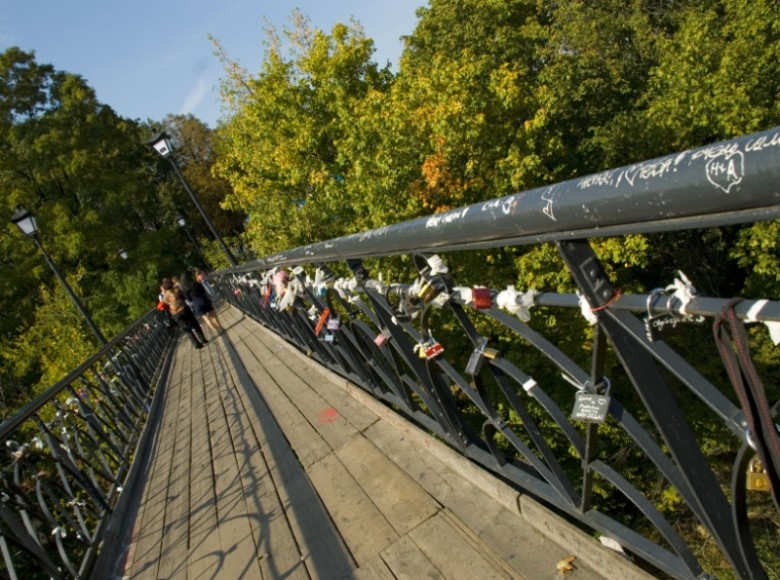 The third stop according to our romantic map is Sofiyivsky Park, an arboretum and scientific-research institute of the National Academy of Sciences of Ukraine. This park is one of the most exciting places in the country that is often visited, not only by local tourists, but also by foreigners. Sofiyivsky Park is known as a famous example of late 18th or early 19th Century European landscape garden design that has been preserved till nowadays. The park has lots of scenic areas with waterfalls, a stone garden, fountains, and ponds. Without any doubt, it is worth it to spend a day there and walk through this masterpiece of nature. Another interesting fact about the park is that in 1985 one small planet #2259 was named “Sofiyivka” after this park.

Multimedia or Vinnytsa Fountain Roshen is our next stop. The fountain is the largest floating fountain in Europe and the only one multimedia fountain in Ukraine. A lot of people that visited multimedia fountains in other countries (for example one of them is located in Prague, Check Republic), reviewed Vinnytsa Fountain Roshen as the most spectacular that they have ever seen. The fountain operates from early April till late October, so do not miss your chance to discover this great entertainment.

The last, but not the least, romantic destination seems like the most peaceful and romantic place on the earth: Island of Lovers. Located on the Ternopil Pond at a distance of 35mt from the waterfront park Shevchenko, the island is a tiny oval circuit with a wooden arbor-rotunda at the center. Its cozy benches scattered here and there among the woodlands of willows, creating an incredible atmosphere. This place can be a real heaven for you!