The city of Atlanta is one of the most diverse and economically profitable population centers in the world. It has been called a city in the trees, as it is one of the few large metropolitan centers with an abundance of foliage. The climate is fairly reasonable, with mild winters and summers that are not too hot. It is also a center for the arts.

In recent years, Atlanta’s economy has been on an upward swing. This is especially true in regards to entertainment and film, which are currently experiencing a steep incline. It has been called the Hollywood of the South by The Washington Times. As a result, there is quite an influx of financially secure industry professionals.

There is also a lot of transit between Atlanta and places like Hollywood and New York. This has culminated in a statistically significant, affluent, circulating population. What this ultimately means is that real estate value is seeing a climb and opening up previously impossible living possibilities.

You can buy a condominium and live there perpetually or you can buy said property and lease it out through an agency to those in the transitory population making reservations. Think of it like a top-dollar hotel room and you get the idea. There are many agencies, which provide such temporary living arrangements to transitory affluent populations.

Essentially, it is like being a landlord for an individual unit. You can retain full use of it as you need and then rent it out through the rest of the year, making enough profit to incrementally pay for the property over time. Once initial establishment costs are covered, it will become a Passive Income Generator. 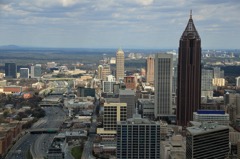 Taking Advantage Of An Economic Surge

But even should such subletting strategies not equal your initial investment in the property, the economic trends of Atlanta stipulate increased property value. That means property value increase regardless, meaning that just by sitting on such a condo, you stand to make money. Of course, one of the chief things to make this possible is the condo you choose.

You are going to want one (or several) that are located ideally and have been properly maintained. There is nothing wrong with older solutions, but newer ones have an additional value to them, which facilitates ease in rental and later sale in many cases. This will be more likely should you source a property that is centrally located near Atlanta’s heart.

According to Own Atlantic, their new condos in Atlanta are “Light, airy, and open. . .Atlantic residences offer effortless flexibility.” These are also located on the northern end of the city’s core. They are near everything without being too near, yet far enough removed to feature greater security.

There is a great deal of versatility in owning a condo. From personal use to property value increases and the potential for turning such a property into a means of regular income, a financially savvy individual stands to see exceptional return on investment.

When it comes to renovations, a newer condo will have all the modern amenities that are in style and should represent ease in the addition of desired features. You will not have to deal with natural forces like mold and other signs of degradation and the neighborhood surrounding such a structure has a level of security unseen in older buildings.

As Atlanta expands, opportunities like this will still exist, but likely not with so much abundance. Atlanta has been on a profitable economic march for long enough that the city is starting to develop a new reputation. The time is ripe. Buying a condominium here could offer a great deal of opportunity!