While I was wandering around the village, Alberto, my guide, approached me with a sneaky smile on my face. He said to me quietly, “So, do you want to experience the real Amazon tonight?” If you know me well, then you would know that there was not a moment of hesitation before I said YES! He told me to meet him by the canoes at 6PM wearing my bikini. My bikini, I wondered? Did he expect me to swim in a river infested with piranhas and crocodiles? I kept my concerned thoughts to myself and focused on how excited I was to see what kind of misadventure I would be getting myself into later. 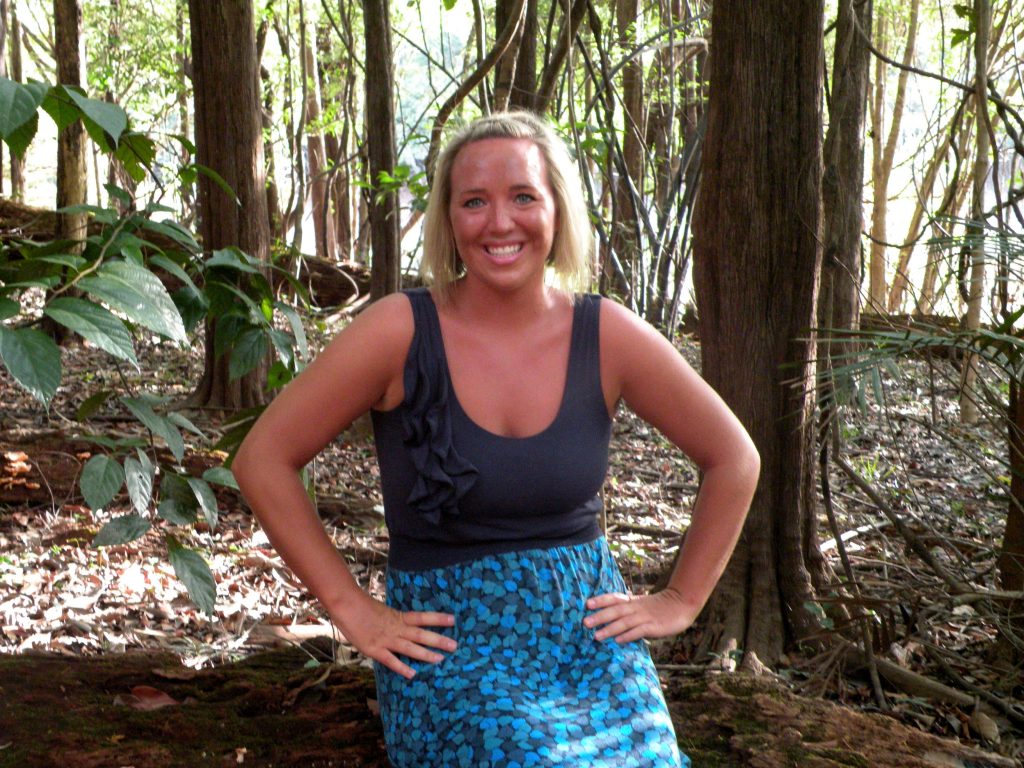 The boat ride back to the eco-lodge was a peaceful one, as the fading sun lit up the water with a magical glow; appearing as though a special path had been illuminated for us to follow. 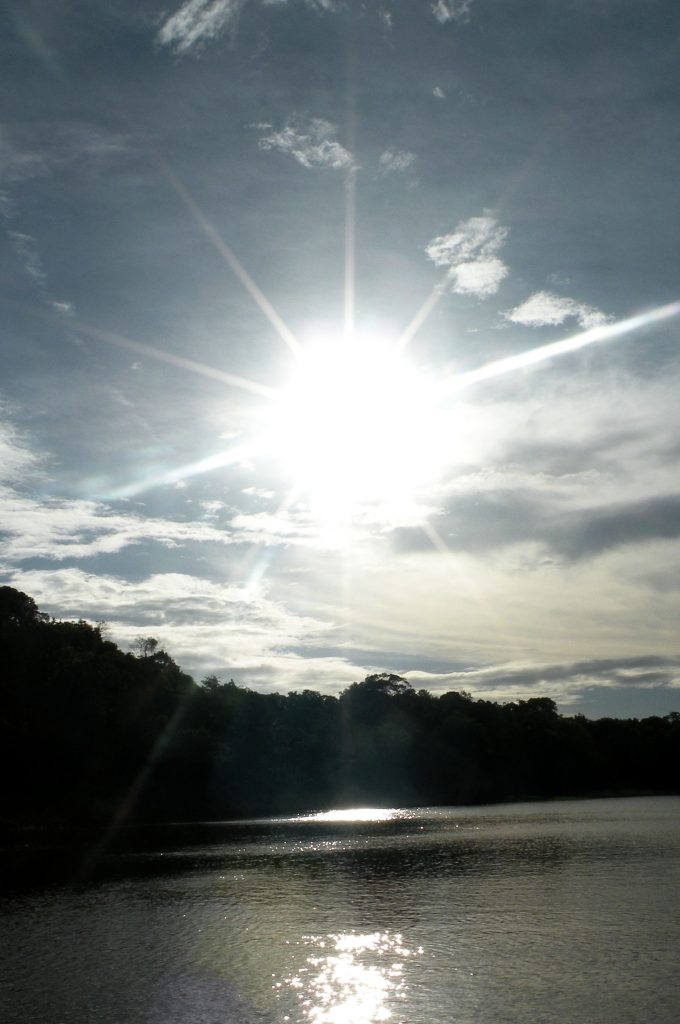 Oh, and the Captain let me “steer” the boat for a while. 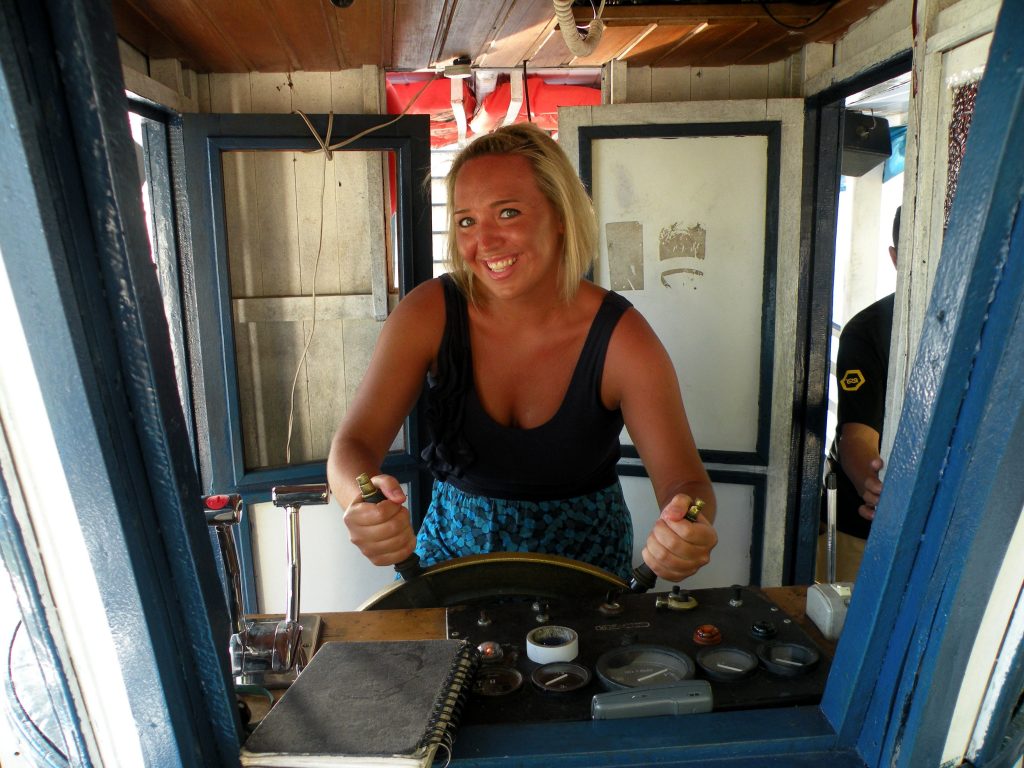 Once we docked, I quickly returned to my cabin to get ready for the mysterious evening that lay ahead. I threw on a bikini (nervously) and grabbed my underwater camera. 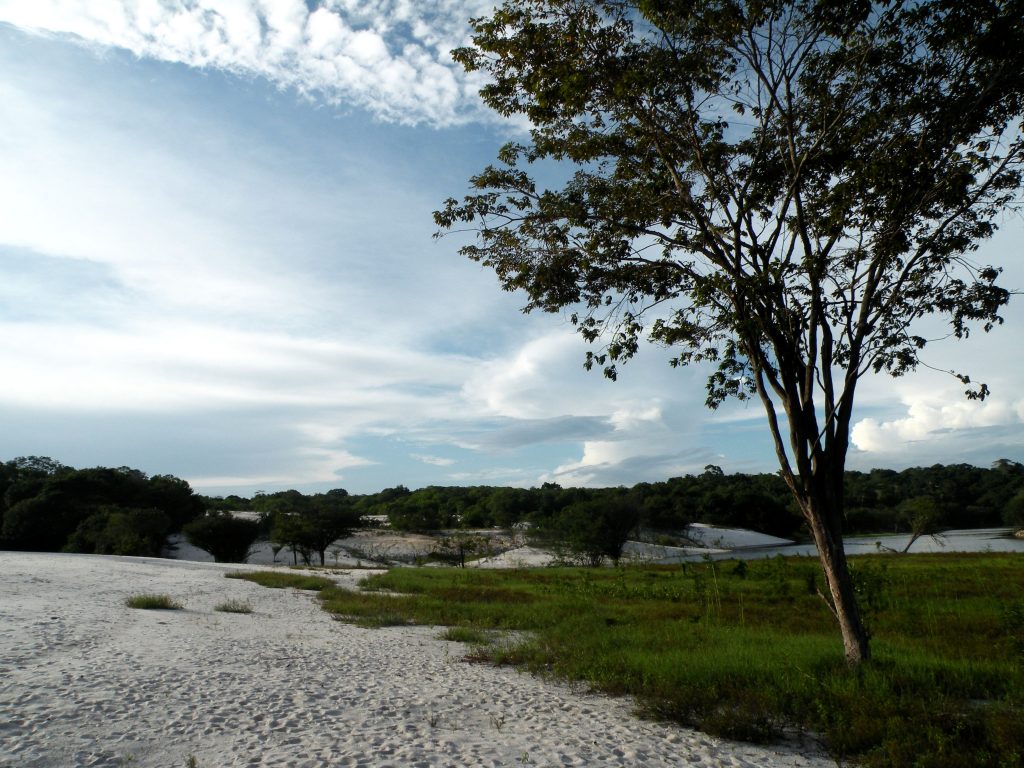 Alberto was waiting for me by the time I arrived. He helped me into our canoe and presented me with some fresh tropical fruit and homemade cachaça. As we floated down the river and I indulged in my picnic of sorts, my soul became so alive! Was I really experiencing this? Even now as I recall this moment in my life, I find it unbelievable. I know that millions of people have been to the Amazon River, but how many people can say that they had a (free) private tour with a native? 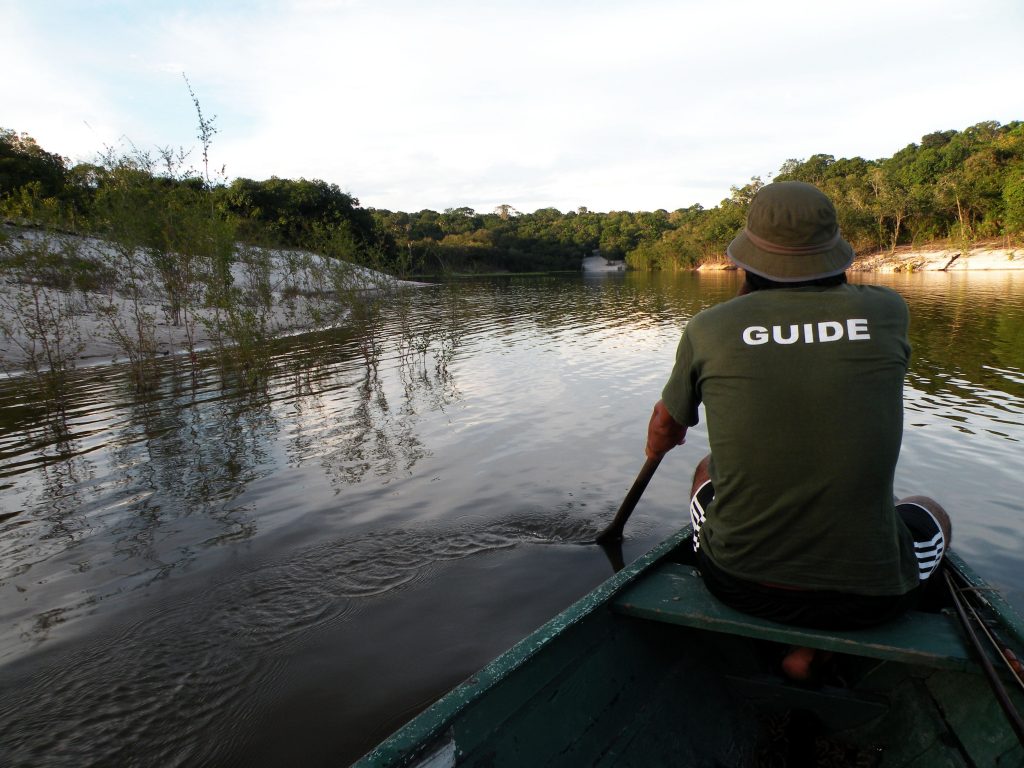 As you watch the following video listen carefully to the sounds of the Amazon:

Our first stop was at a sandbank thirty minutes away. Alberto encouraged me to go swimming once we docked the canoe. I laughed at the suggestion. I have done some crazy things in my life, e.g., jumping out of plane over the Great Barrier Reef and diving with Great White Sharks in South Africa, however this seemed to be truly crazy. Everyone has heard the stories of people being eaten alive by the blood-thirsty piranhas! Alberto showed me his machete and promised that while there was wildlife around us none would attack and if for some reason they did he would protect us. I took a couple of deep breaths and reminded myself that if I passed up this opportunity I would forever regret it. I want to live my life with no regrets, thus I jumped straight into the river. The water was surprisingly warm and felt absolutely incredible. 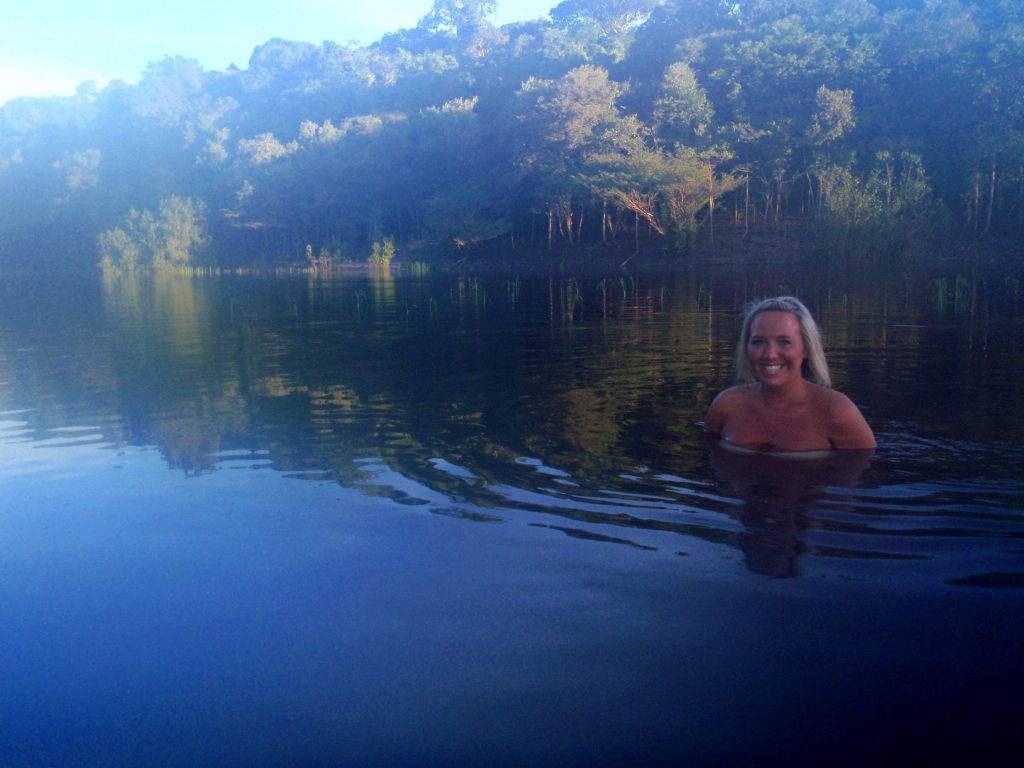 I swam around for a bit and I am not sure if it was the shots of cachaça kicking in or if I felt invincible since I had yet to be attacked, but I decided that in order for this memory to be complete I needed to skinny dip. And off went my bikini! Who gets to say that they have been skinny dipping in the Amazon? This was, without a doubt, the most memorable experience of my life to date. A beautiful bird flew over me and kept us company for a while. Alberto knew how to “speak” the language of all of the animals in the jungle and soon began a conversation with our new friend. It was awesome to witness this exchange. 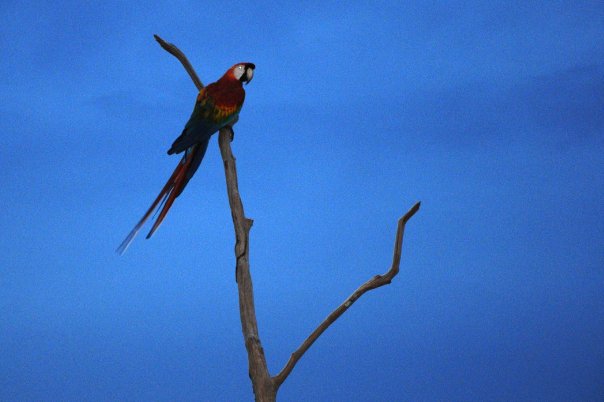 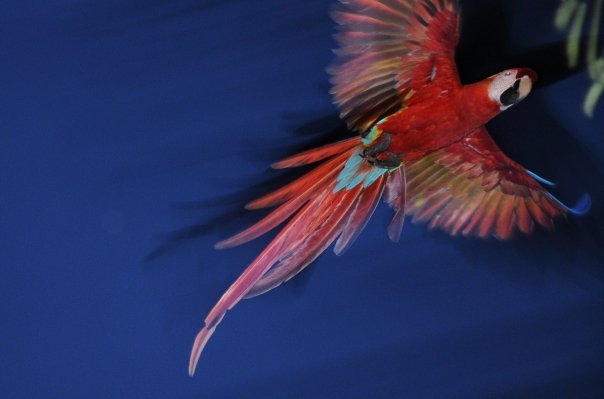 As we continued to swim, the light of day disappeared and was replaced with an abundance of stars.  Alberto announced that it was time for our night safari. We got back into the canoe and continued to travel deeper into the Amazon. The mouth of the river became much more narrow and the jungle became more more dense. I cannot put into the words the emotions I was feeling at this point; they just would not do the experience justice. I remember saying over and over, “Is this really happening?” and Alberto laughing at my disbelief. For him this was an every day experience and for me this was a once-in-a-lifetime experience.

During the day Alberto was quite talkative and eager to share information about the Amazon. Now that he was actually on a mission to find animals, he was very serious. He listened intently and occasionally he would use his flashlight to search for eyes.

About ten minutes after we had gotten out of the water, Alberto spotted something and said to me, “Prepare your camera.” 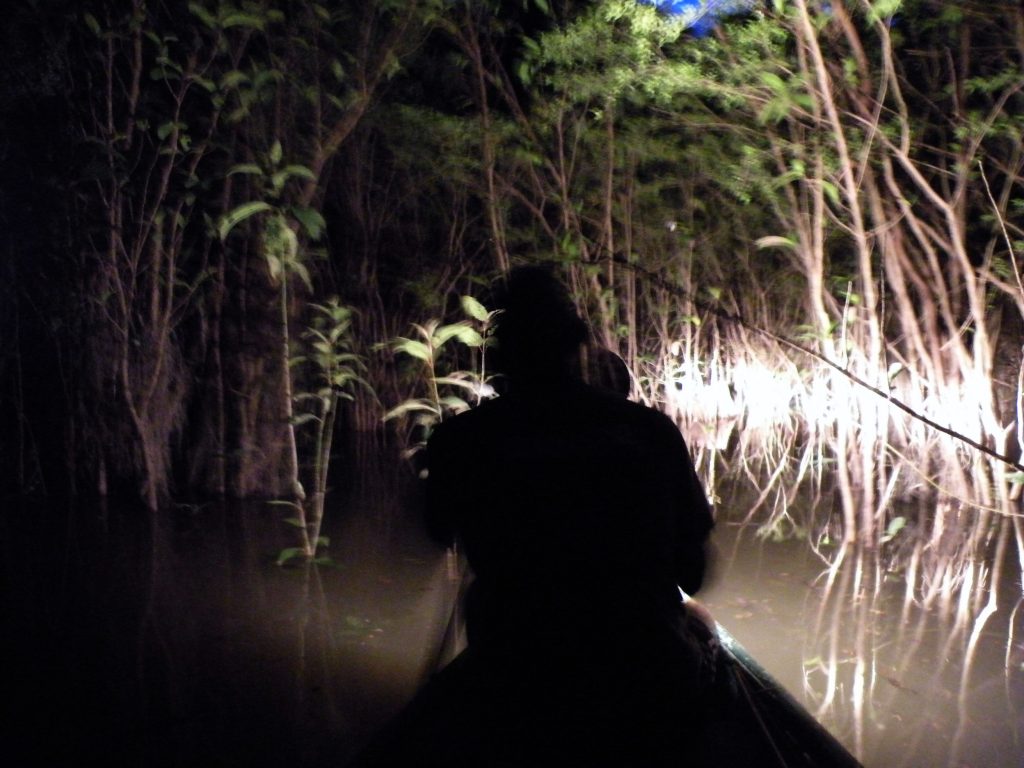 Before I knew it, he had jumped into the water and grabbed a crocodile by its head. My first thought was “how unfreakingbelievable!” My second thought was “Ummm, was I not just in this same water?” 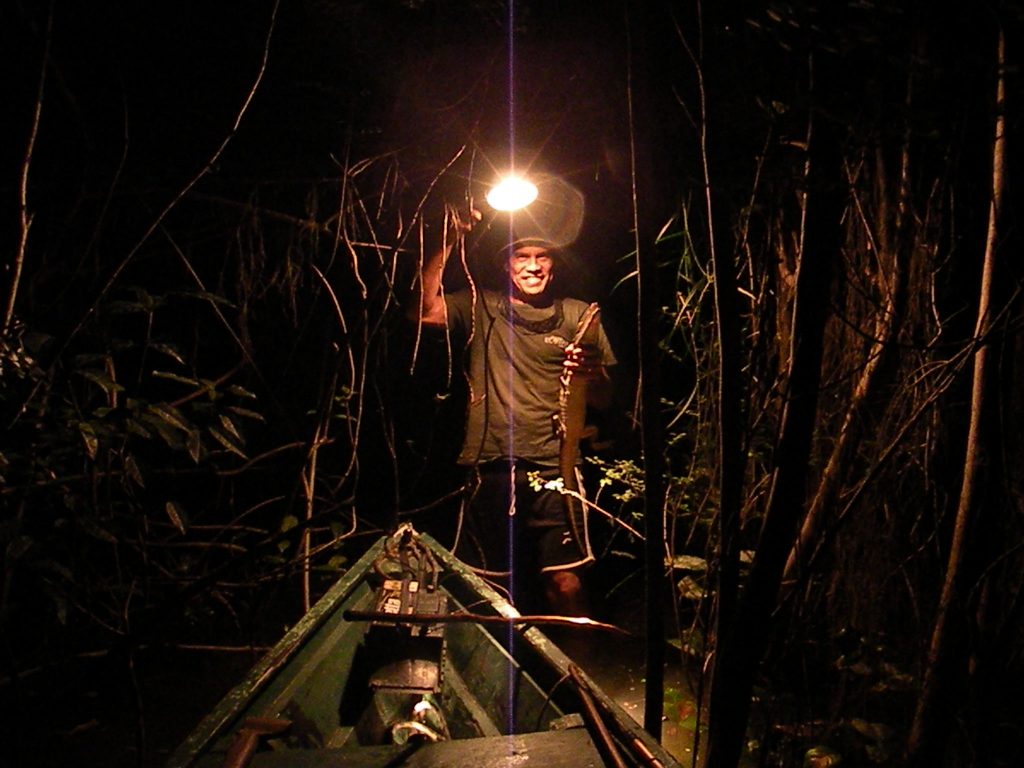 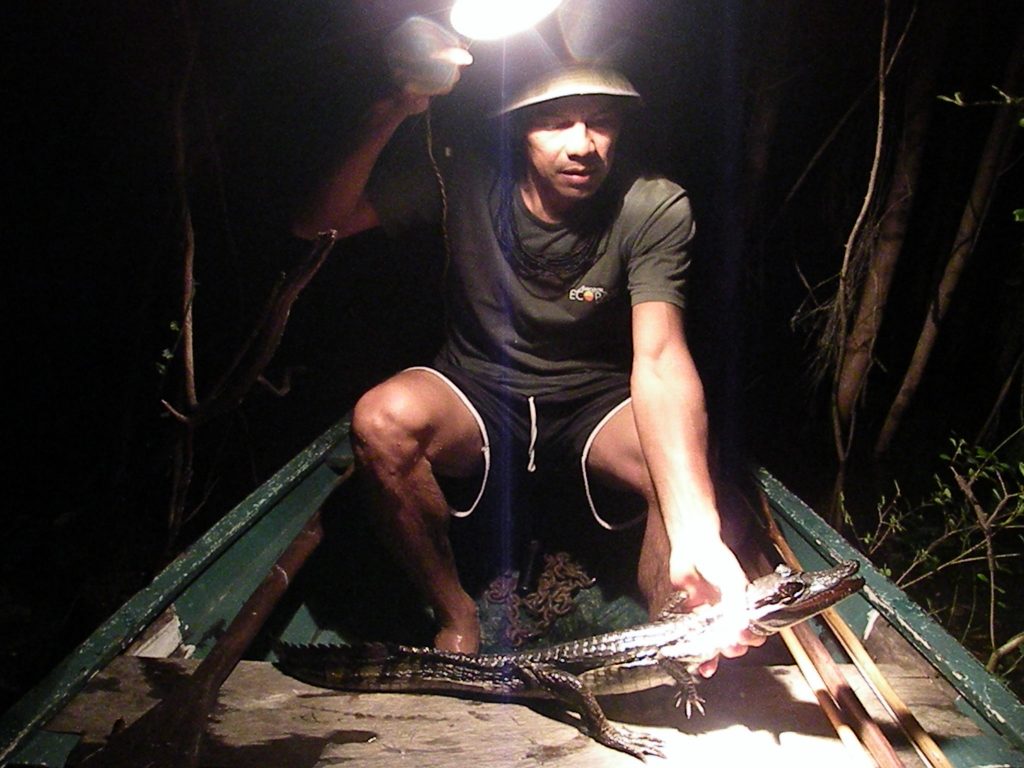 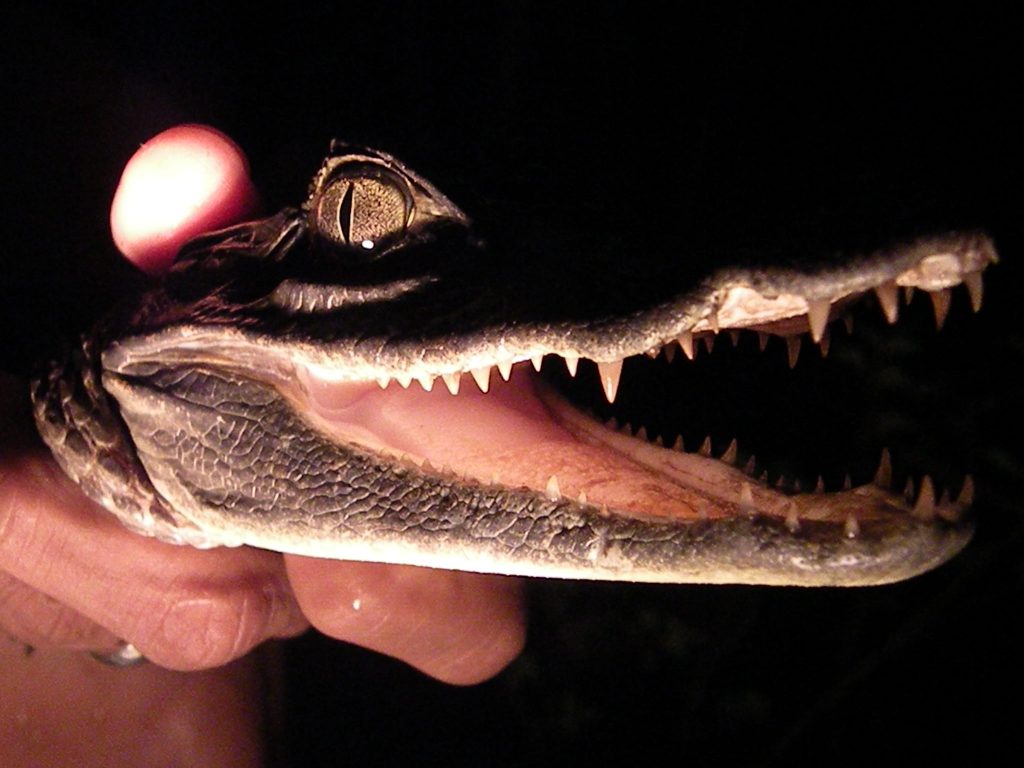 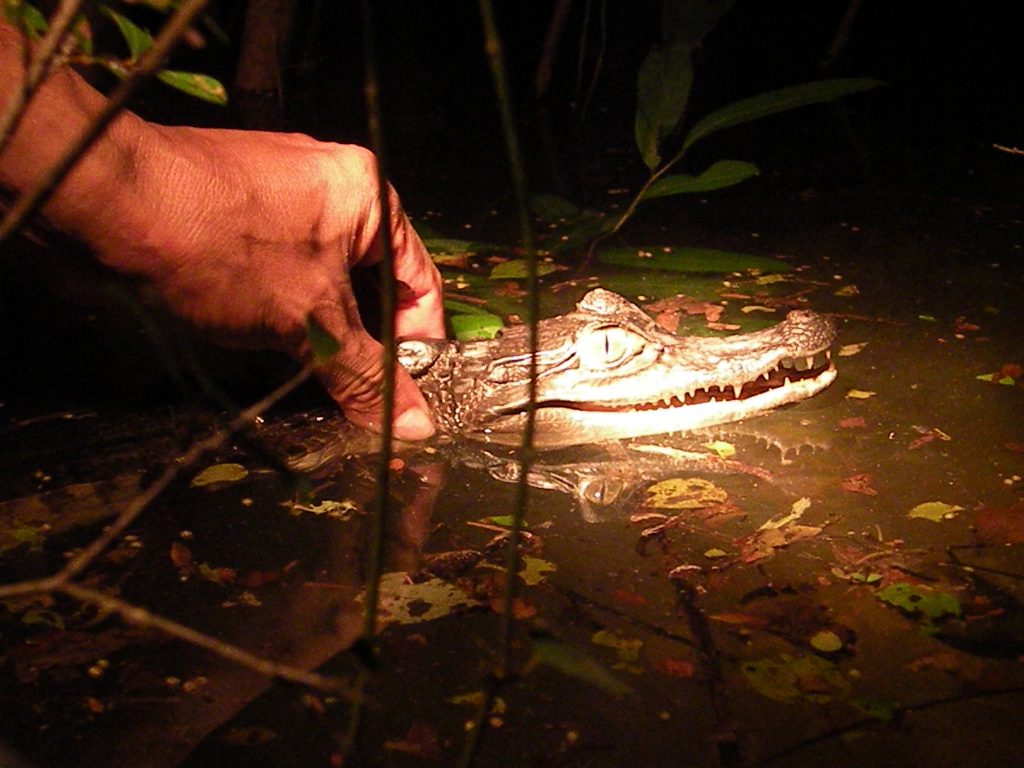 He let me touch the crocodile, something I never imagined doing. I admired Alberto greatly — this man was so in touch with nature — a rare gift that most of us will never cultivate.

We were both pretty hungry and decided that it was time to return back to the eco-lodge for dinner. Adventures sure work up an appetite! 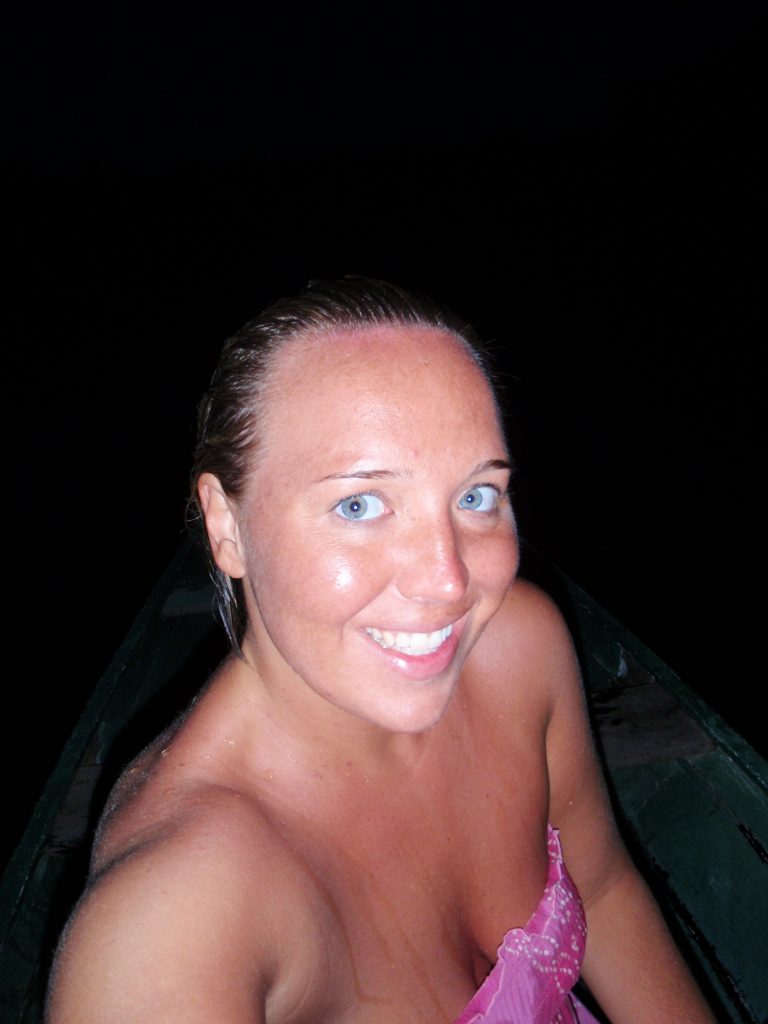 As I got out of the canoe, Alberto said these departing words, “I hope you are ready for round two tomorrow!”